Ive arrived in Morocco, exciting, a new country and a continent I have never been to before, Africa.
Its a lot different to Europe. 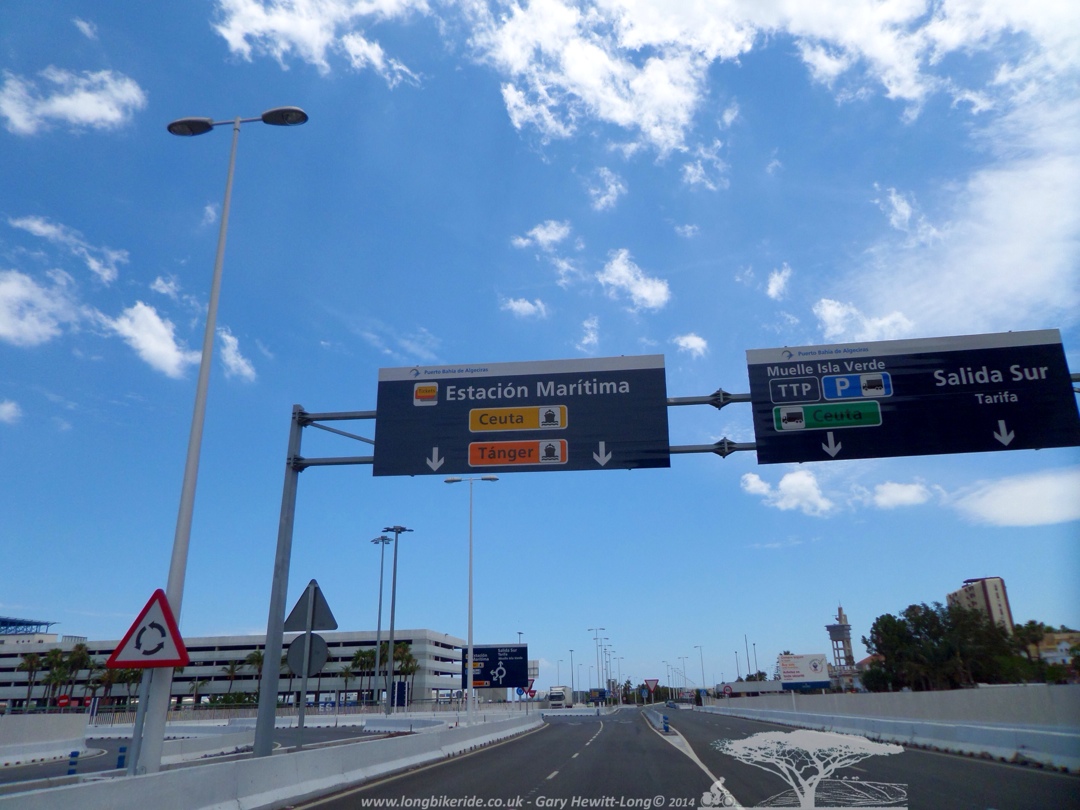 Morocco., the gateway to Africa, this way..

Arriving and entry was easy, buy ferry ticket, pre-register entry to Morocco on the ferry, clear immigration and cycle into Morocco. 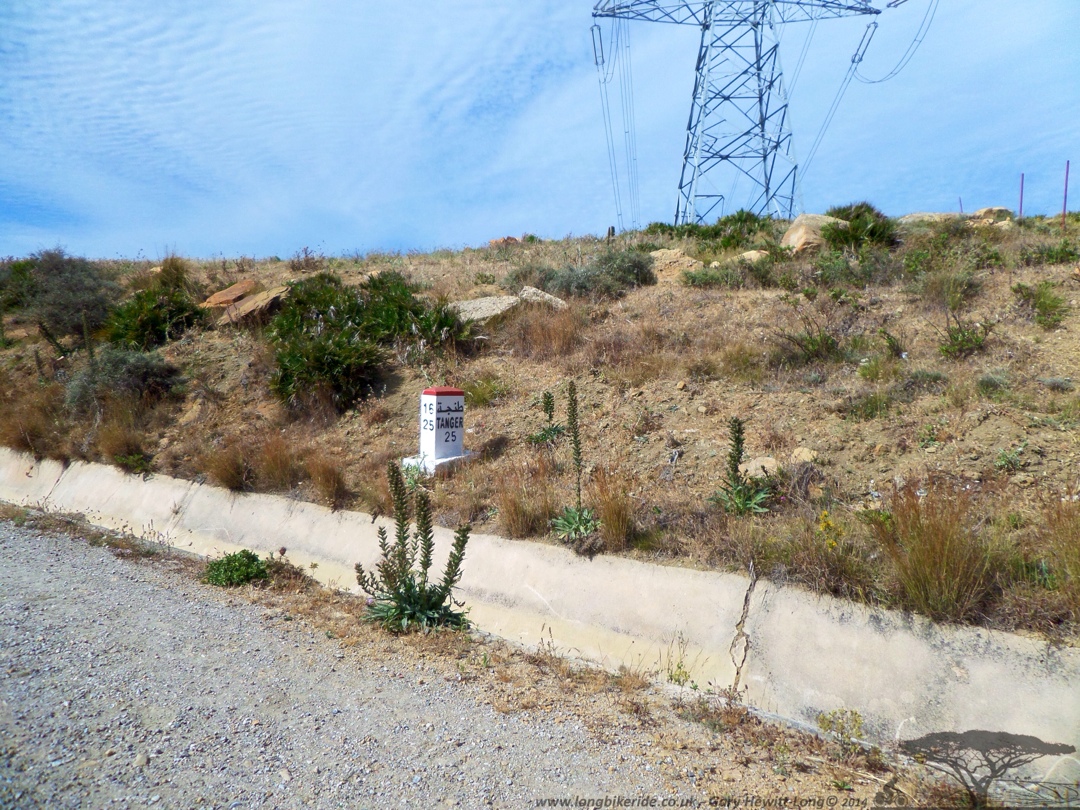 On the road to Tangier

It was quite an eventful day, I woke up and was stung by a wasp, on the way to the ferry my rear pannier broke (Ortlieb), 5 miles into Morocco, one of the spokes broke on the rear wheel and then Vodafone sent me a message, data charge for ‘rest of the world’ is £3/mb!I arrived in Tanger..
Where I met Hamza my warmshowers host. My first evening in Morocco, we went to a cafe to watch the world cup, drink tea and coffee and play a board game with Hamza’s friend, also named Hamza. 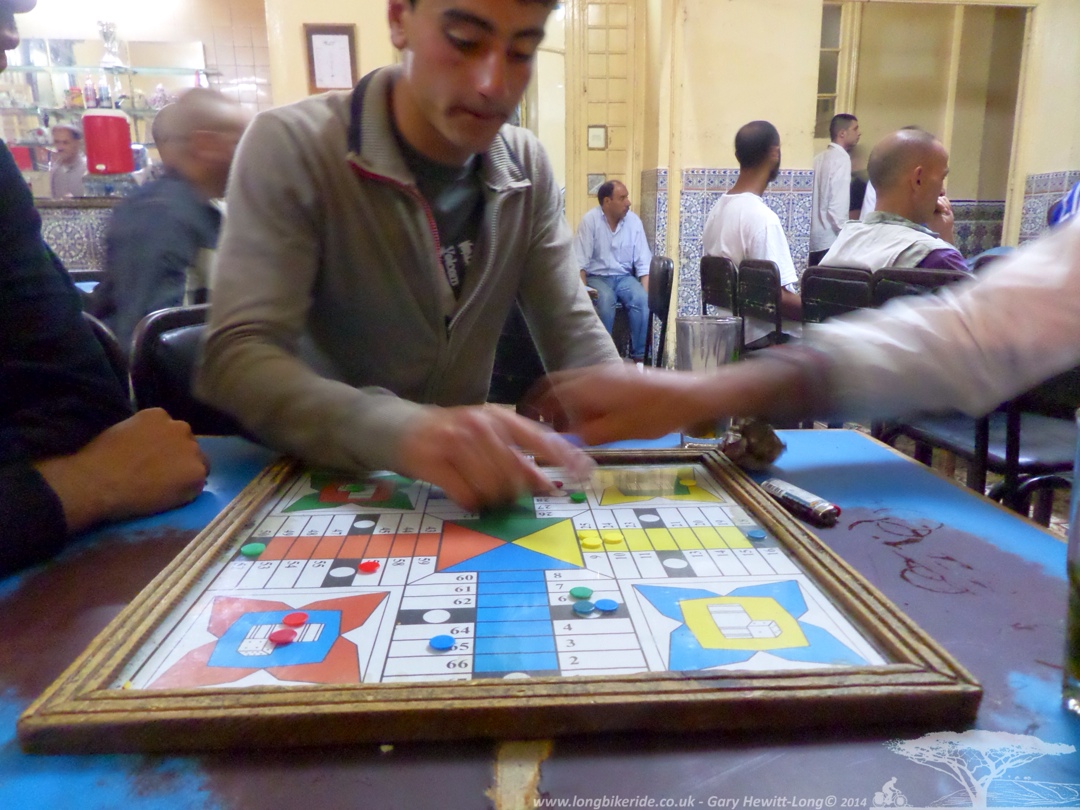 At a local cafe and tea shop in downtown Tangier

An authentic Tagine, with fresh fish Hamza had caught with his spear gun in the morning. 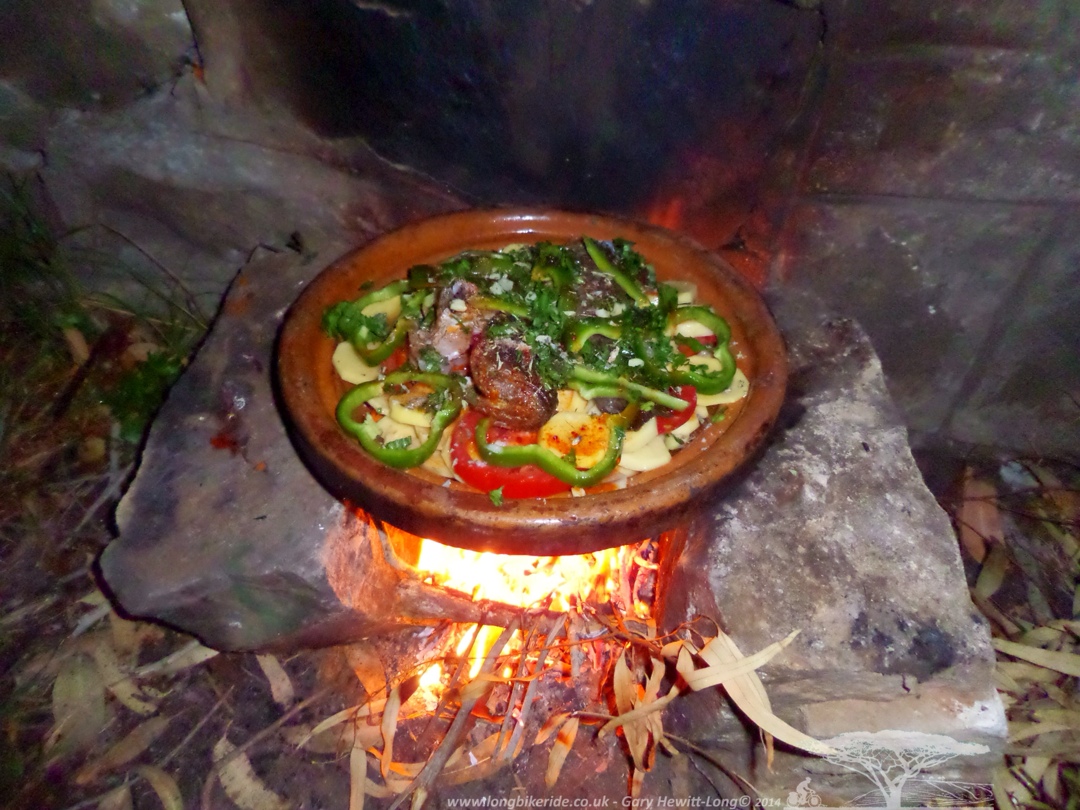 I left Tangier after having received lots of help from Hamza, getting a Moroccan Sim card, a map, spare spokes (im not sure will fit, slightly too long).
Hamza riding my bike 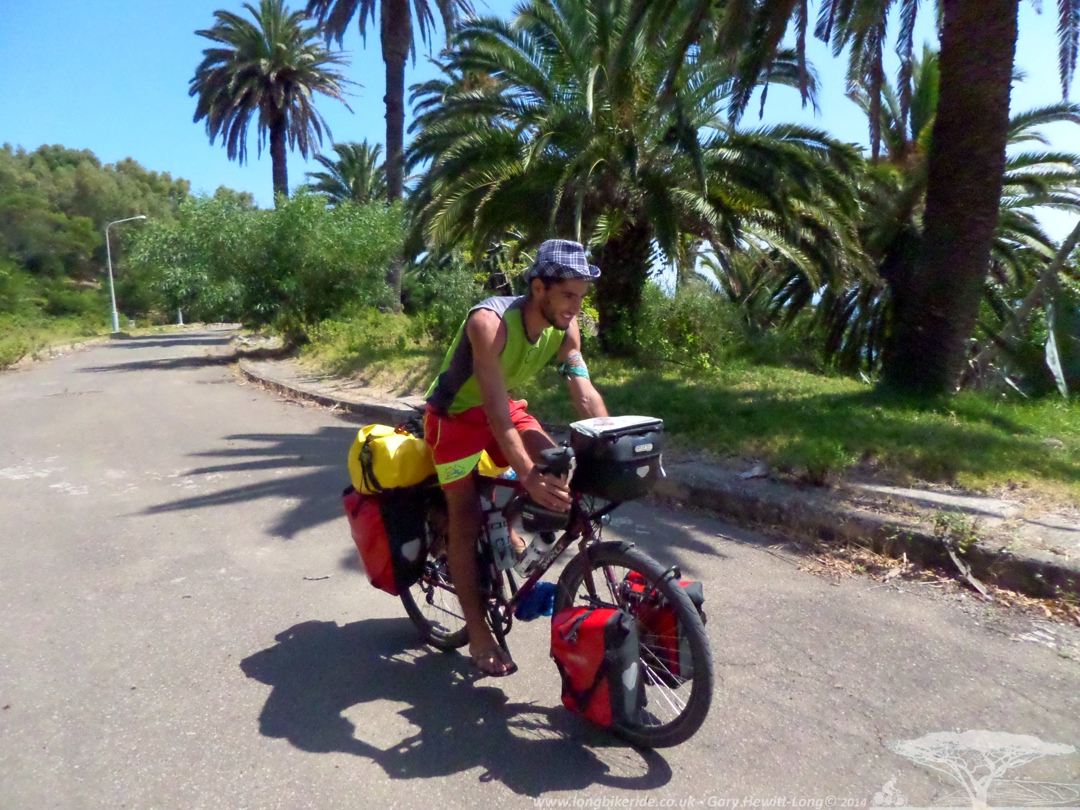 Was harder to ride than he expected.

And watermelon and other fruits. 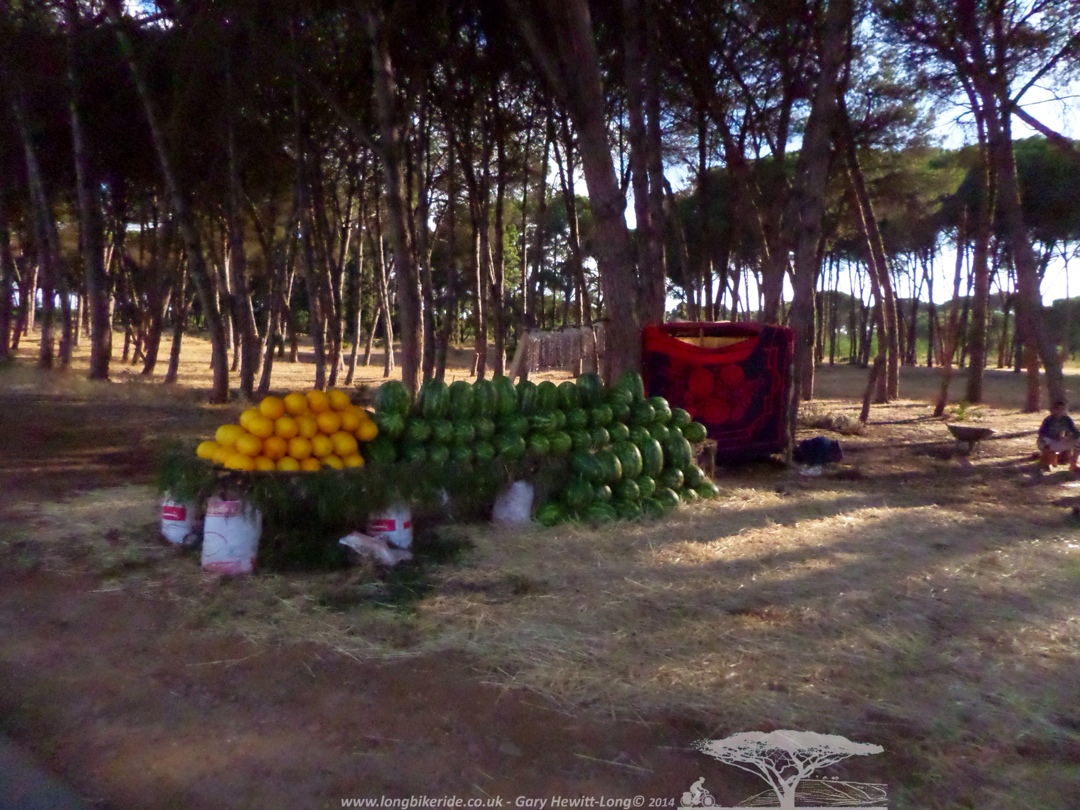 Going past bananas being grown in plastic houses. 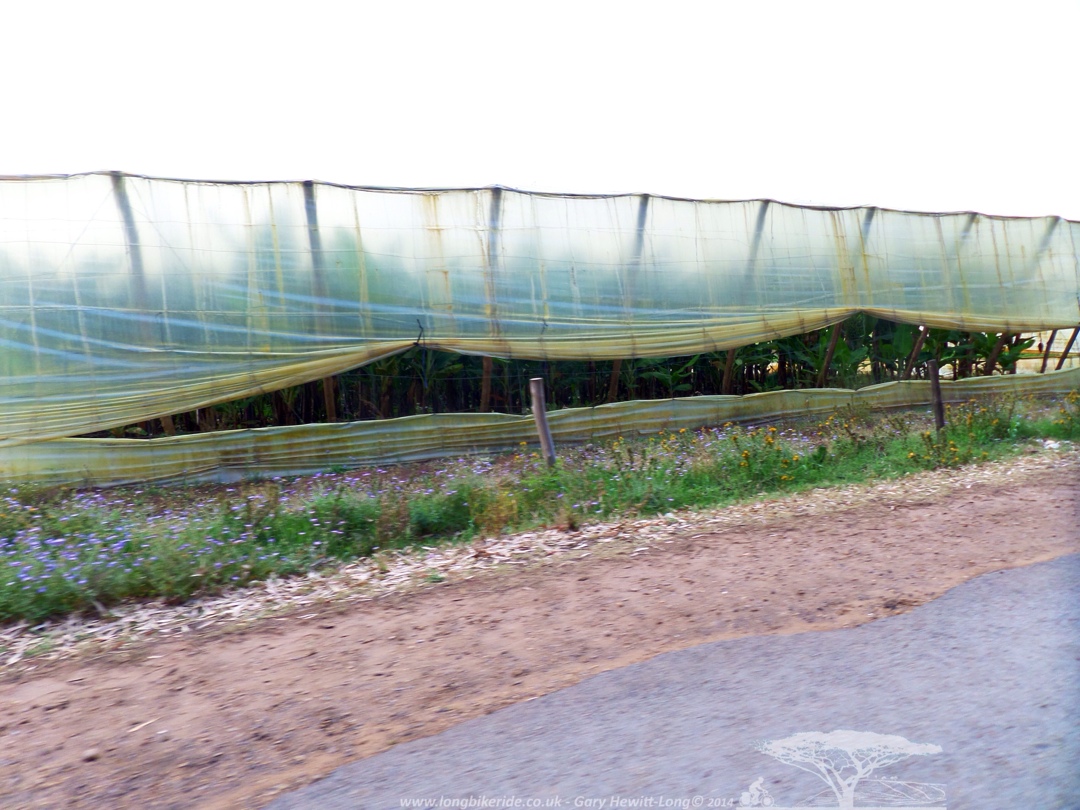 I was offered watermelon by a farmer, although i think he wanted my Camera.. Or a visa to the UK, I’m not sure which. 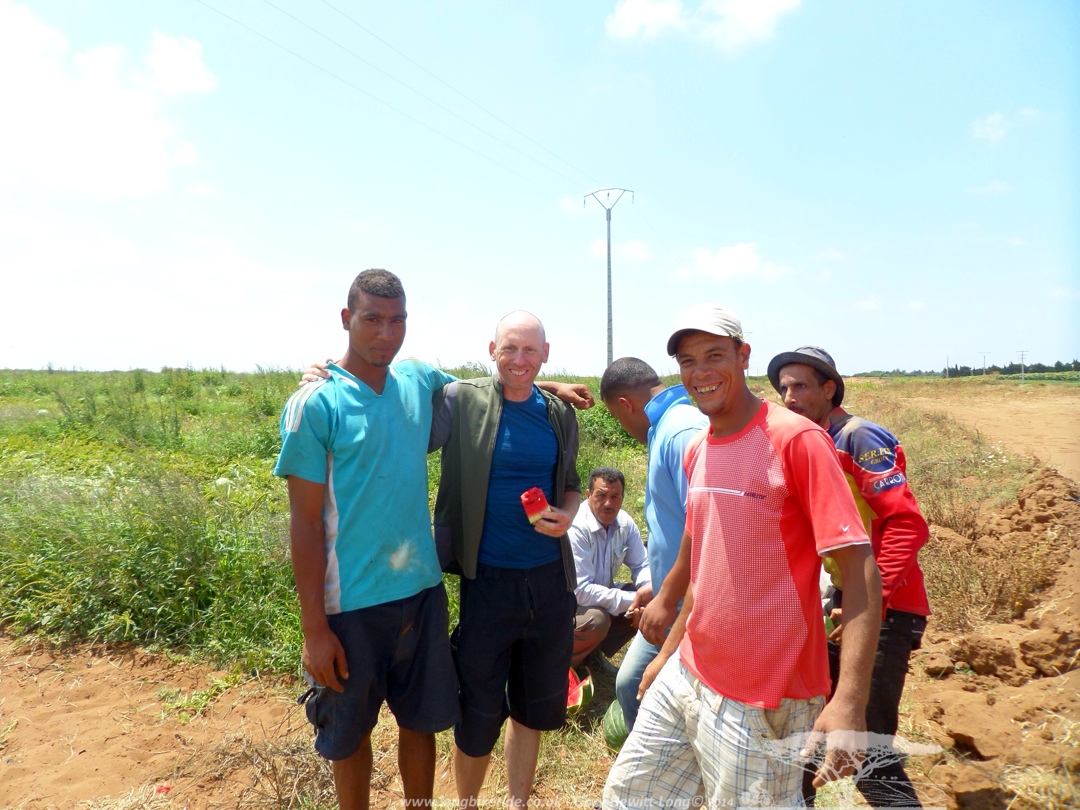 The roads turned to mud in the Agricultural area after Larache. 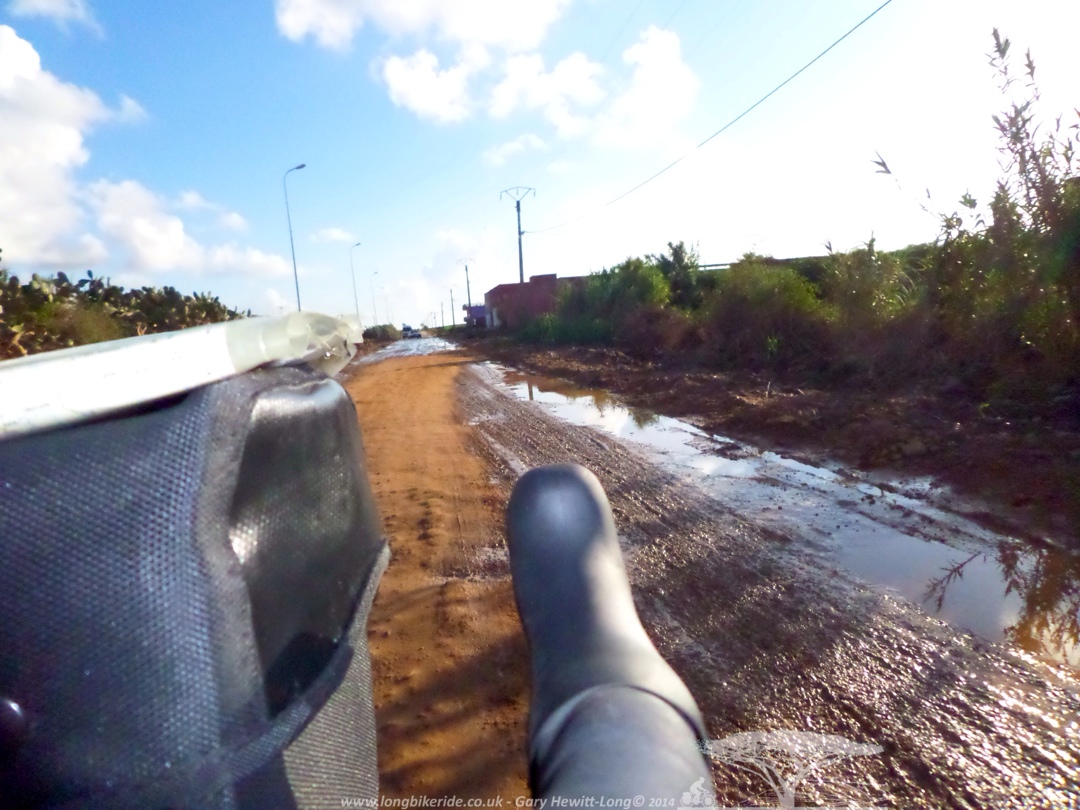 Storks nesting on a pole. And on a telephone mast. I am stopping on another workaway placement in Rabat with Ana from Spain and Salah from Rabat at their school, they teach English, French and Spanish to the local children in the poor houses.
After a few hours it was my turn to try and teach English, not as easy as you might think. I am still astounded and ashamed, I continue to meet lots of people who can communicate in more than one language whilst I can only effectively speak English and some would argue with that! One young lad could speak Arabic, French, Spanish and was also learning English! The work that Ana and Salah are doing is fantastic, they need more help, volunteers and funds for materials.
Ana took me into town to get chicken. Its slightly different here, not wrapped in plastic and refrigerated. Take into account I was a farmer so my angle is slightly different to your average consumer, thinking about it the way you get chicken in Morocco is far better than at home (in my opinion). The bird is picked (see them in the background) they are then killed The head is cut offf quickly and cleanly. Once the bird stops flapping, the seller quickly and efficiently prepares the bird, so quickly the muscles were still twitching when the cut joints were put in the bag.

1. You know the meat is fresh
2. No need for expensive refrigeration or processing.
3. The end user is NOT removed from the fact this meat was a living animal and is far less likely to waste any of it.
It may seem barbaric to many to watch, but the meat we buy in plastic trays has been through the same or worse, in the UK normally a factory style abattoir.

I went looking for seafood along the coast with Salah and a couple of his brothers. The sea is rich with fish, shell fish, mussels and other foods. Stood perilously on the rocks

Stripping and cleaning the Mussels. Preparation of the catch

And visited a local market in the evening. The market was very busy as Ramadan started the next day so everyone was preparing foods for the night and early morning. One of many local Markets in Rabat – Supermarket, what’s that?