The workaway week in Rabat with Ana and Salah at their school near the Barakas in Rabat was an experience I never thought I’d have in a million years.

Only a couple of months ago living in the UK with a comfortable job and taking lots of things that we in the UK take for granted. It’s a real eye opener to how things can be so different in other countries (and this is the first I have reached outside of Europe) that in reality are not actually that far away, in a car you could reach Morocco in a few days. The children who attended the school either lived in the nearby housing complex or in the Barakas (Favela). 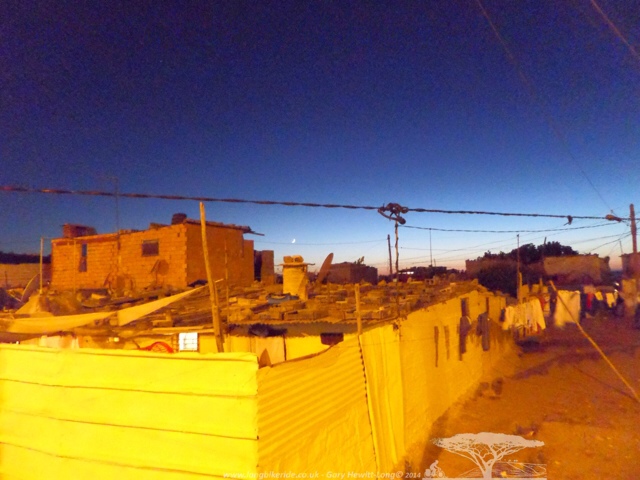 The Favela’s are houses that are not like anything we see in the UK and are probably easier recognised as housing you see in Brazil, but they are also in countries closer to the UK, like Morocco. 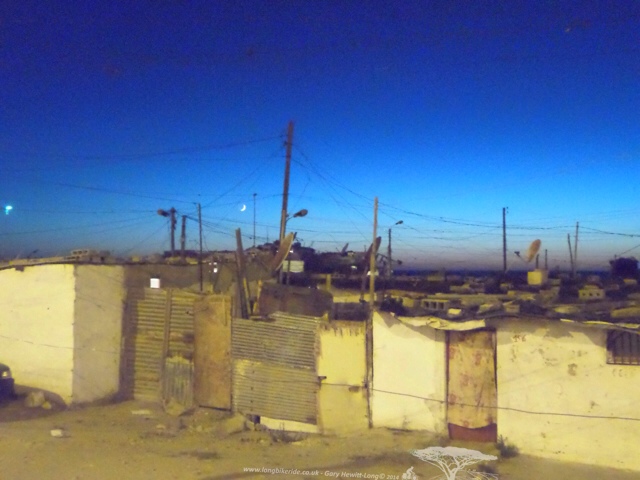 Barakas at night in Rabat

The houses are cobbled together, ramshackle tin roof’s the electricity that is wired into the grid without paying and water is also plumbed into some but not all of them. To look at from the outside they don’t look great, but visiting them, people have not much money but have made nice clean homes inside them. Whilst I was working at the School, some other volunteers arrived, Luis from Peru, Nurcia and Maria from Spain. 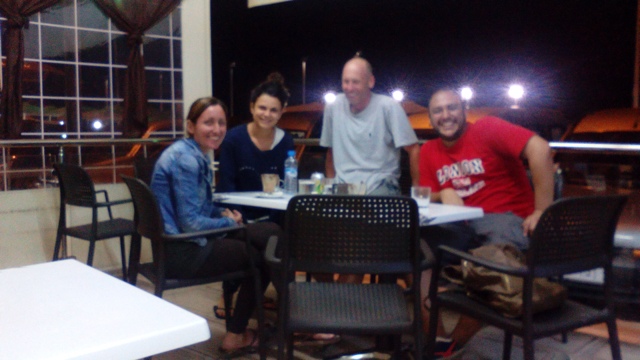 Night out (I had Cramp)

We took time out in the evening to relax over a meal and take in a Bar that served Alcohol (Passport required to obtain entry). Prices were high £4 for 500ml of beer in the ‘upstairs’ bar. 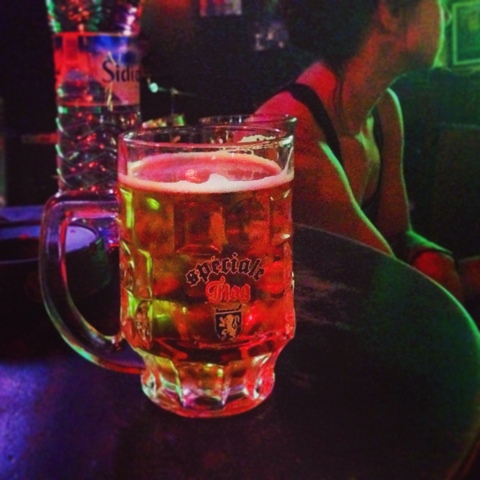 It is illegal for a Muslim in Morocco to drink Alcohol and during Ramadan it’s even illegal for them to eat during the day, if you are fit and healthy food and drink should only be consumed before or after sunset. Boulangeries and Pattiseries open during the day to sell food for eating after sunset, the smell drove me to stop and buy food, it must drive the local people nuts. 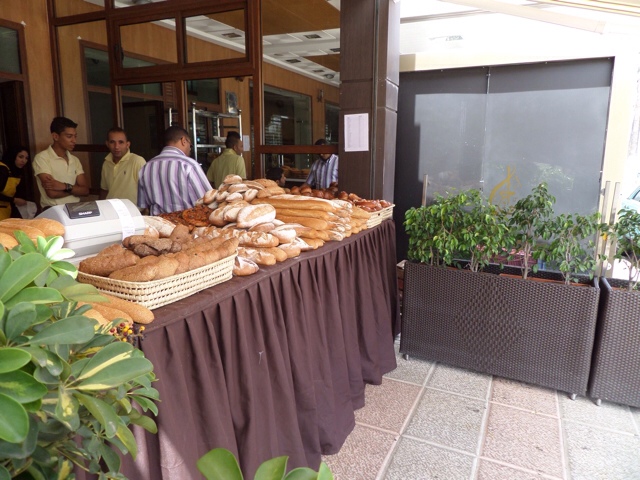 I left Rabat on Wednesday to head toward Casablanca where I had arranged to stay with a Korean Warmshowers host Yeung An Ju (Jo) who was working at a local school teaching the children Korean. Casblanca streets are manic, its a miracle the place isn’t littered with bodies as by some miracle the traffic in particular order switches from lane to lane, with people just walking out into it to cross the road. There are a lot of cars and vehicles with dents, but the same can be said for Paris. 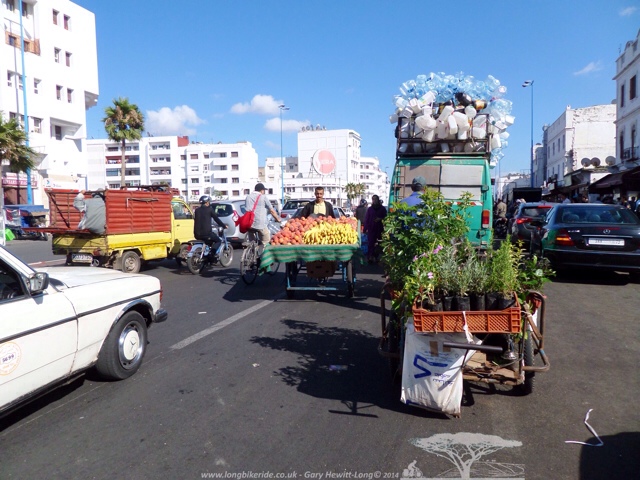 Jo had a crazy cat called Tammie!, who liked to play a lot and had the biggest eyes I have ever seen on a cat. 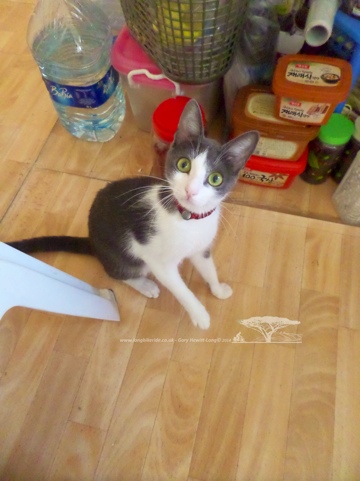 Wild Camping is proving difficult, there seems to be nowhere in Morocco that you are not found or spotted. Each time I have tried I have been found by someone, in each case it has not been a problem, people have been nice. When I explained the problem I was having finding places to Jaouad the hostel (cloud9 in Essaouira), he said Moroccan people are like Mosquitoes, everywhere and you can’t get away from them, it drove his father nuts looking for peace and quiet! He meant that in a nice way when he compared his fellow countrymen to Mosquitoes.

Riding into the Province De Safi. The scenery changed, previously I had been riding through lots of areas with lots of people, growing Sugar Beet, Water Melons and all manner of veg. There were lots of roadside stalls selling shellfish, fish, vegetables, fruit and even one selling inflatable toys for the beach. 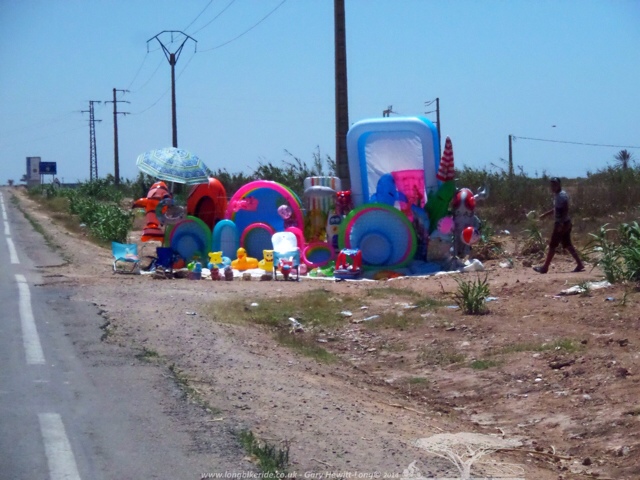 Inflatable Toys for Sale by the Road

As the land became more Arable, the fields got bigger and the litter problem disappeared for a while as the areas were less populated (pity I didn’t need to camp).. 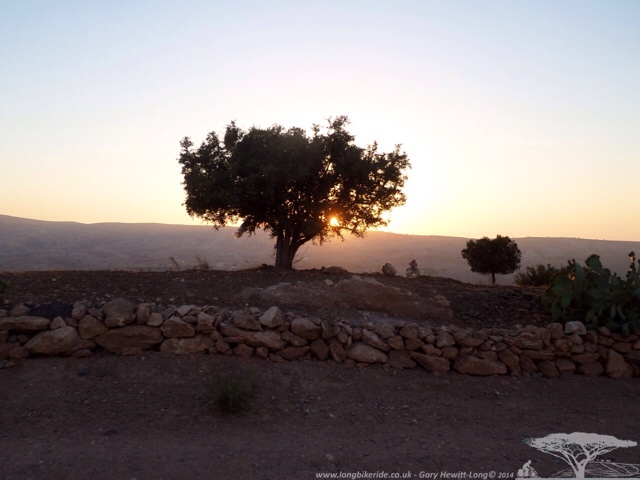 Time for a rest

With the temperature increase the wind rose as well as the warm air was sucked away, luckily in my case creating a tailwind for most of the time.

Locals on bikes on occasion raced up to meet me or to draft me, some adults and some children, the children taking great fun if they managed to overtake me (of course I let them…) Local lad riding with me

With the bleaching effects of the sun, the hair on my arms is now Blonde.. 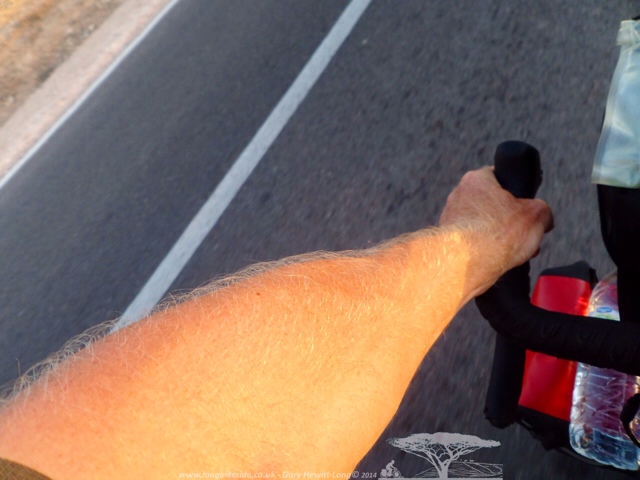 I’m now a Blonde!! Well at least my arms are.

As the flat arable Lands ended, the mountains started and it started to get hilly, at the end of the day with the sun setting, the view was amazing. Heading to a Youth Hostel in Essaouira where it costs 75MAD per night to stay (£5.31) per night in a shared dorm I came a cross a colony of birds with young nesting in the trees. Local birds (of the feathered variety)

Much of the route had writing on the road that looked like writing for a cycling race. After checking online it turned out to be some of the route that was used in the Tour du Maroc (Tour of Morocco).