Sorry for the delay in updating the Blog, yesterday and today have been hectic. 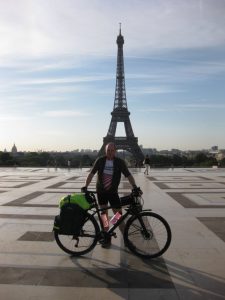 I arrived back in Portsmouth at 6:30 UK time yesterday.The cabin on the ferry was quite good and definitely a lot better than the reclining seats that I had on the way out.
The alarm in the cabin is pre-set to go off an hour before the ferry is due in port which gives just the right amount of time to get washed, dressed and out for some breakfast. I was out of the room in super fast time to try and get in the breakfast queue before too many others. I made my way up to the cafe area, came round the corner to a queue from hell. Not overly pleased as I needed the calories.
I headed back to find somewhere to sit to eat the last couple of pain au chocolat in my bag and in front of me was a sign for the Restaurant. As I walked through the door it was clear to see a load of empty tables, lots of food and a bunch of French waiters ready to go!
The breakfast was near enough identical to the one in the cafe (which I had on the way over). The only difference being it was about £3 more. But for this, it was brought to the table with extra toast and a large pot of coffee instead of a cup, bargain!! 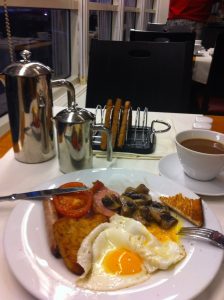 As I got off the ferry, the ramp and roads were wet and it didn’t take too long before the rain started.
After a week in the sun I couldn’t complain, I had been lucky so far so a bit of rain on the last small part of the journey wasn’t too much of a problem.

The ride back was good other than one mechanical problem coming through Upavon about 10 miles from the end. During the ride to Paris and back, 5 or 6 times when changing the front gears, the chain locked up between the mechanism and the front sprockets. Each time it wasn’t too much of a problem, I back pedalled and it freed up allowing the chain to drop onto the intended sprocket. Today it happened just as I was about to put extra power on to go up the hill coming into Upavon.
It locked, there was a nasty metallic noise and with the extra effort I was applying to try and power up the small hill, something gave and the chain started to continually rub against the front shifter.
To get going again I had to undo the front mech and move it round slightly which had the effect of stopping me from using the lowest front sprocket. Arriving back in Devizes was excellent; I’d hurriedly arranged to go back to the District club from where I had left a week earlier, as I was going to make it in time before closing. When I came round the corner of the Town hall, I was greeted by several members outside the club, my Partner Belle and Rebekah and my Mother all clapping, shouting and taking photographs. It was a great welcome home which was much appreciated.

See the last part of the Journey here