Finally got most of the packing done. Bike weighs a ton…. Can’t think of much I can take out though. I’m a little worried that the weight will be too much.
Although, since I started cycling I’ve lost about 44lb. I think I’ll take off the bags and weigh them.Should be setting off at about 11:15 from the Devizes and District Club. I originally intended to slope off from home around 10:30, but the Treasurer was having none of it and said I should leave from the Club. I think maybe he wants to make sure I’ve gone and he’s getting his money’s worth :-).

Thanks to everyone that’s sponsored me so far. It’l give me a boost when it rains. 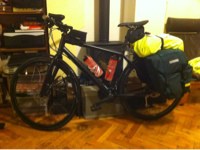