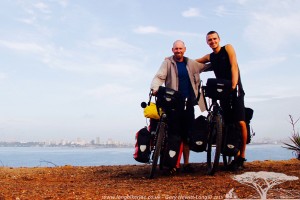 The previous night had been spent in a tent in a small island just off of Dakar, Gorée Island. A small island no longer than 900 x 350 Metres that’s was synonymous with with slave trade but in reality only a few hundred slaves were shipped from there.

Wouter and I had met after crossing the Sahara and had decided to cycle together for a while. We’d both been in Dakar for a few days securing our visas for the next two countries that needed them, Mali and Burkina Faso.

We arrived in Gorée later on the previous afternoon and the wether although kind during the day decided
to turn at night. We’d met an artist who had been using an old World War Two bunker who let us setup camp by them. The previous night we’d watched birds flying along the cliff tops.

I took the photo with Dakar in the background before getting the ferry (named Beer) back to the mainland and continuing the journey.