My first week in East Africa now completed, and I found circumnavigating Mt. Kenya quite an experience, crossing the equator twice, once back into the Northern Hamisphere on the east side of the mountain and back into the Southern hemisphere on the west side. For most of the route, the mountain is obstructed from view as you are not close enough. The top of the mountain was constantly in cloud and it was clear to see a different weather system over the peak. After wearily making it to Kongonis, having a resting day at Kongonis allowed me to rest, update the blog, do some research and make contact with some British military guys that are posted in Nanyuki. The British army use Mt. Kenya for training and some of the guys use Kongonis to have a beer and to watch football and relax. I joined in with the beer side of things, meeting Dan, Dave and Paddy.. All three knew the Devizes area either having been based near there before at Tidworth and Paddy having lived near Chippenham! Dave, Dan and myself at Kongonis, Nanyuki

The next day I left Nanyuki, riding into town as the heat rose. On the left I catch sight of pointing to a Commonwealth War Grave. It’s situated a couple of miles out of town and the graveyard is in stark contrast to it’s surroundings, immaculately kept whilst there are tin shacks around it.

Walking through a war cemetery is a stark reminder how lucky most of us are not to have ever experienced conflict, especially first hand. In these times where there is still so much going on the world and where there is a lot of conflict or distrust & ill feelings between some people in different religious groups, it’s also a reminder that many religions and people from different countries have come together in the past to stand and fight together. Some unfortunately paid the ultimate price with their lives. 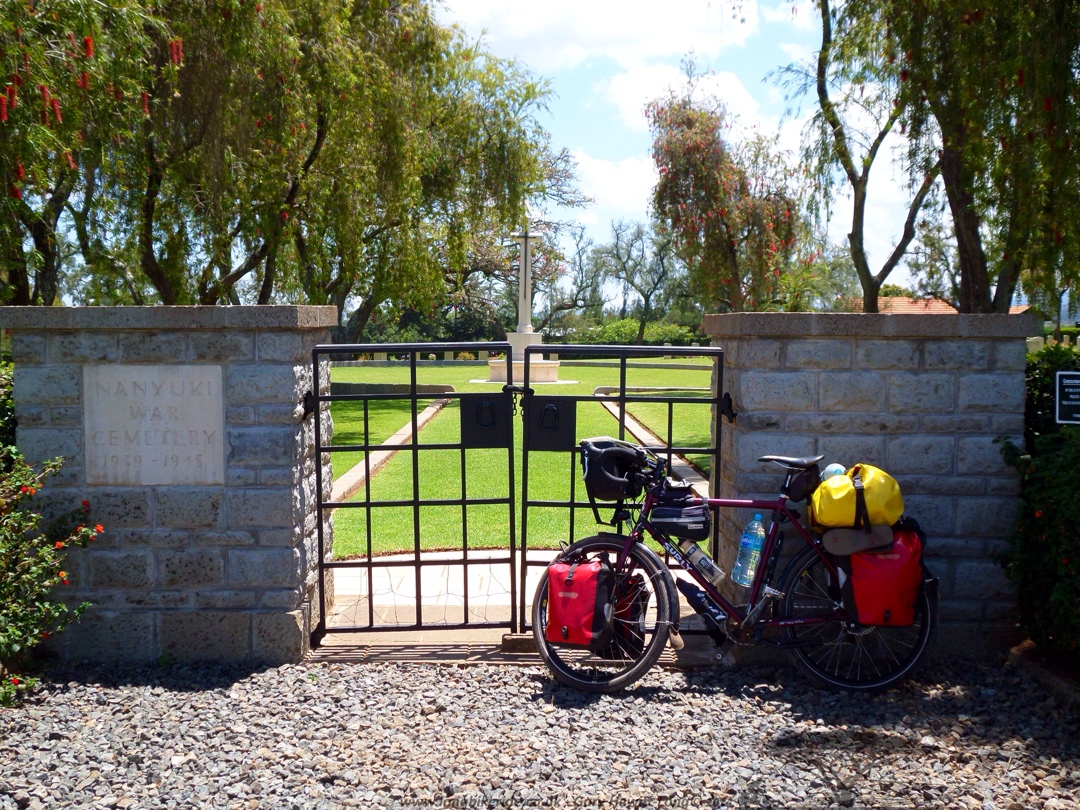 More can be seen about the Cemetery here: http://www.cwgc.org/find-a-cemetery/cemetery/2090537/Nanyuki%20War%20Cemetery

Not far out of Nanyuki is another Equator sign, as I cycled back into the southern hemisphere. More tourists pass this sign and there are people on hand to do a trick and show the coriolis effect (similar to where the water circles around the plug hole) and to try and sell gifts by the roadside. The touts come and speak to me but I explain with a smile that I am travelling by bike for a long time and have no spare cash and even less room or the energy to carry souvenirs that are not in my head or recorded digitally. Explaining this they are happy and leave me alone to setup my camera to take a photo. The landscape is completely different leaving Nanyuki, on the East of the mountain there are lots of small hills and the area is very lush with banana tres, coffee and tea (chai) plantations. Coming up from Meru and there are large expanses of Agricultural land, similar to European styles of farming, which I am told is owned by two white farming families. But coming out of Nanyuki on the west side of the mountain the area is fairly arid. Then a headwind started, the elevation profile for the route I was taking promised a gentle slope half way to Nairobi, but the wind robbed me of my rest and easy riding, I had to pedal hard to make progress in the hot sun.

After about 20 miles of hard slog… downhill, I was riding just within the hard shoulder area when there was a large bang, the bike veered violently to the left, something hit my leg and there was the sound of breaking glass. It took me a couple of seconds to realise what had happened. A white car was speeding off in front of me and I looked back to see my rear pannier bag on the floor. Some reckless driver had hit me and his wing mirror had shattered. Stopping, a local guy on a bike rode the other way who had seen the incident and remarked “that car was trying to kill you!”. Now I don’t think he was trying to kill me, as he didn’t stop I couldnt ask what had happened but I suspect he was either not paying attention, on drink or on drugs. it is not illegal here to chew a substance called Miraa (known as Khat in some other countries), it’s a drug and users are common place. Kongonis had signs up banning it on their premises and I was told that users sometimes have badly bloodshot eyes. Whatever the cause I was extremely lucky the car hadn’t struck me another inch to the left, the outcome could have been far worse. After the crash I reinstalled my side mirror. 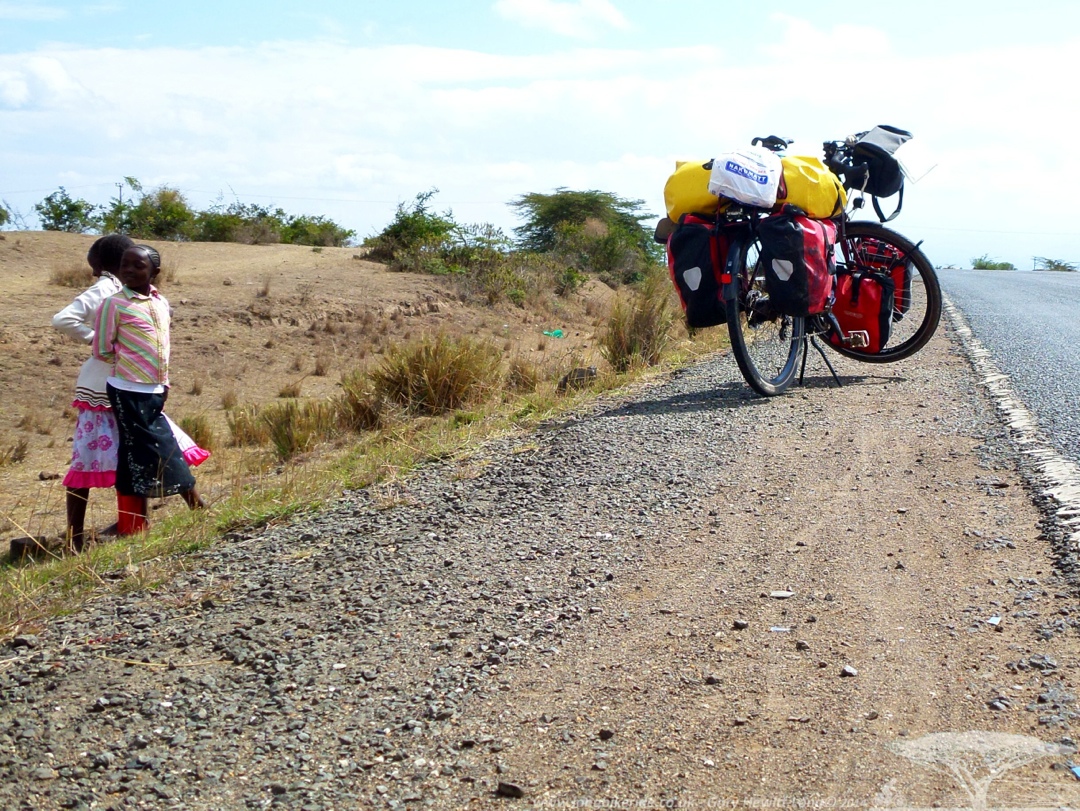 Passing some trees on my left as I slowly climbed a short hill, I noticed something moving, and then again something else moved. As I drew to a stop I realised it was some sort of primates, there were a group of them making there way into more tree cover away from me. I managed to get a couple of photos before they all completely dissapeared. 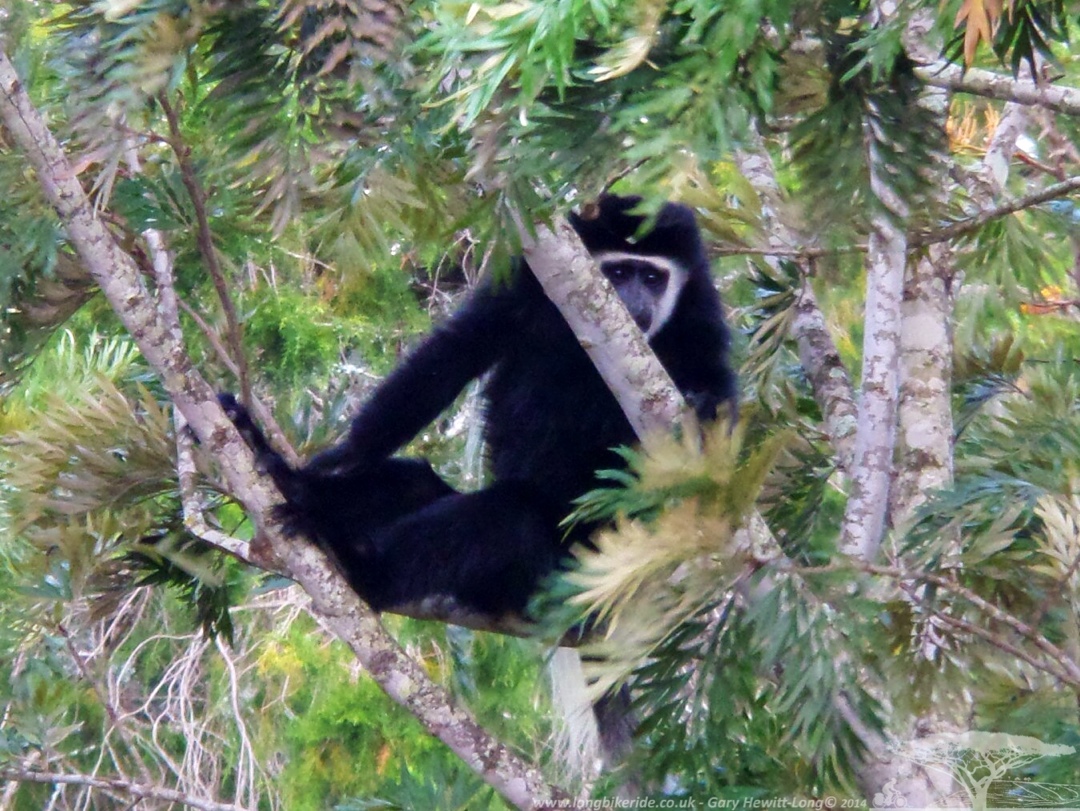 I can still see you!

When I arrived back in Nairobi with Ben, Jo and family. Ben had given me a copy of Chris Froomes book, ‘Climb’ that he had finished reading. After reading the first couple of Chris explains a ride out of Karen, a small town just on the outskirts of Nairobi. It sounded good so my plan to ride through Nairobi and along the A104 changed. I’d go to Karen and ride part of the road as well. On the way though there were a couple of other attractions that made this change of a route a no brainer. There was the David Sheldrick Wildlife Trust which has an elephant orphange and a well used overlanders campsite Jungle Junction nearby.

The David Sheldrick Animal Trust is only open between 11 and 12PM each day to minimise the stress on the orphans. Whilst the trust is known mainly for the Elephant Orphans it also does a lot of other work for wildlife conservation.

Each baby elephant needs a lot of care, similar to that of a human child and keepers sleep with the babies. Elephants are easily stressed and baby ones die easily when they are stressed, so rearing them is very labour intensive. 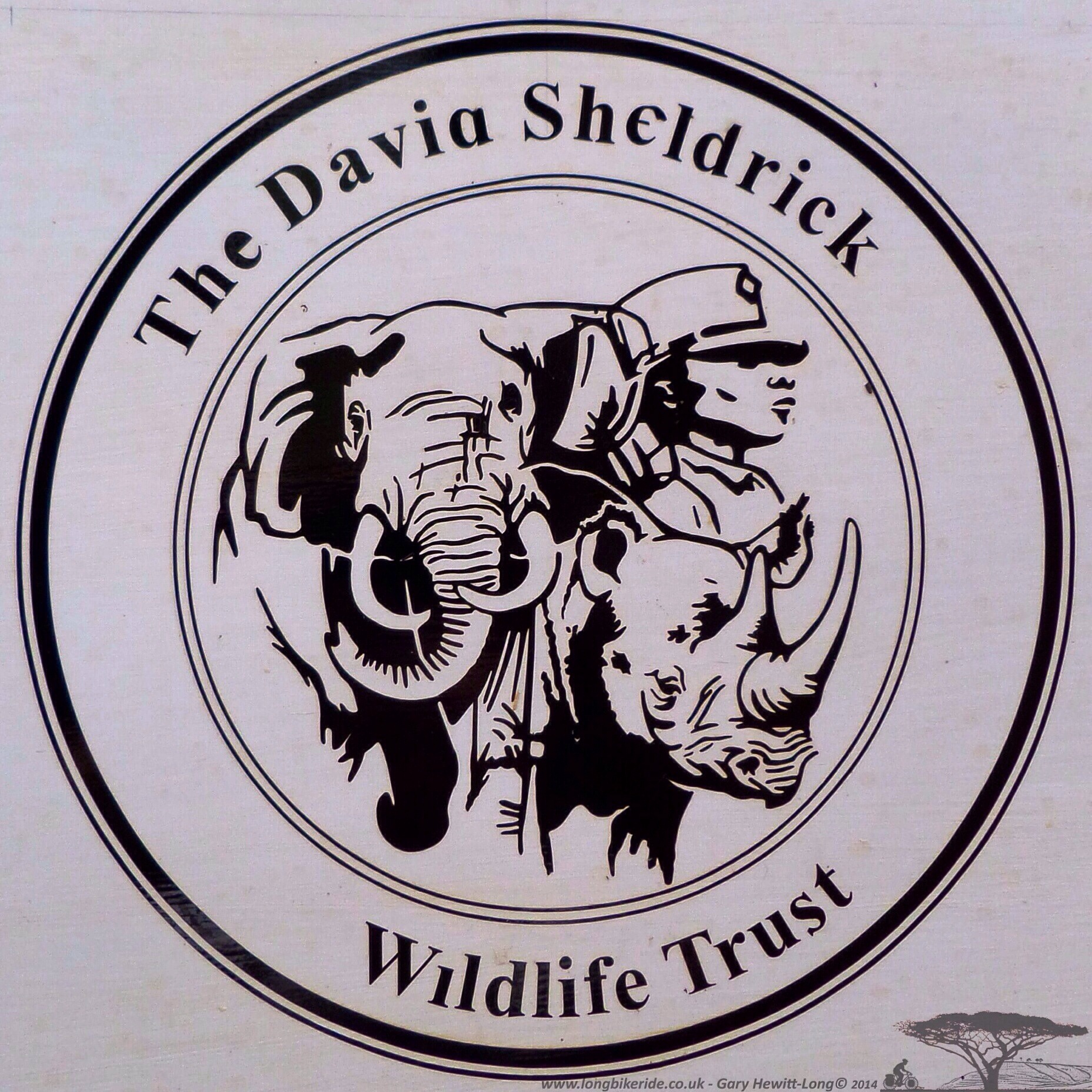 I arrived at the orphanage expecting to see a few orphan elephants but was amazed to see 29, each one with a tragic story as to how they ended up at the orphange. Some had simply gotten stuck in water holes or wells whilst others had witnessed poachers kill thier mothers. The ones I saw at the orphanage were the lucky ones, ones that had been found or reported. There are more that are not so lucky and die out in the wild. 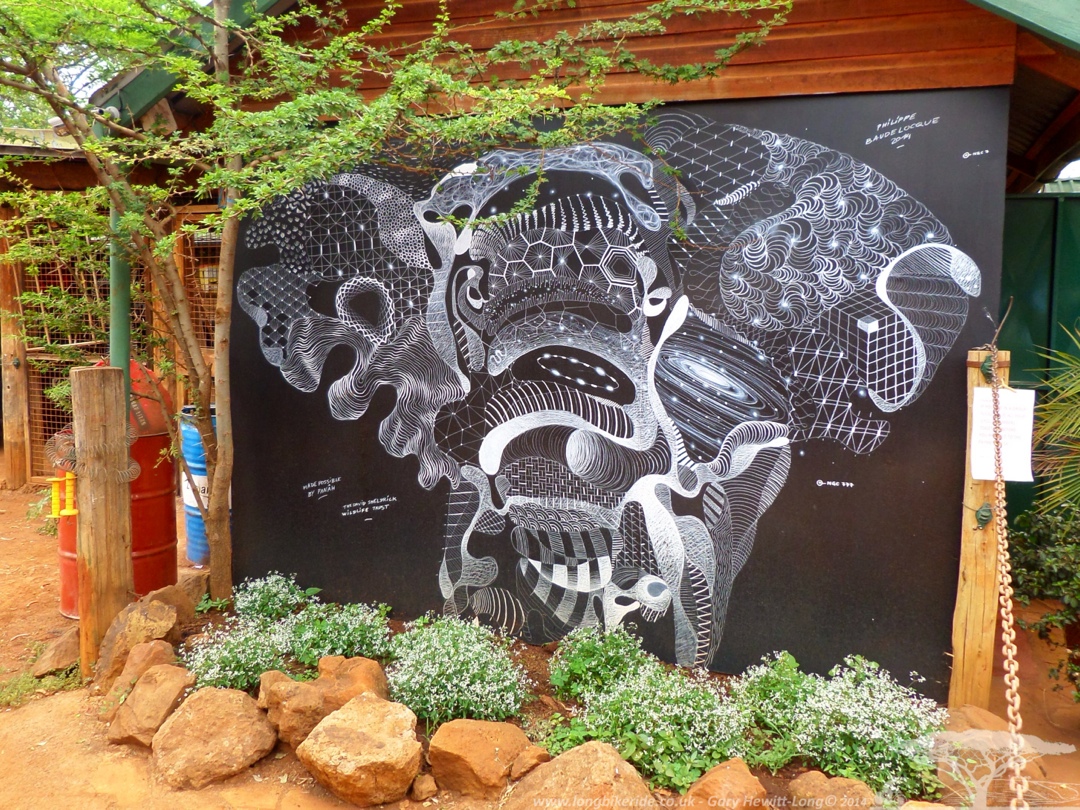 When the Trust get reports of an elephant orphan, they charter a plane from the nearby Wilson airport and fly to its location, speed is critical. 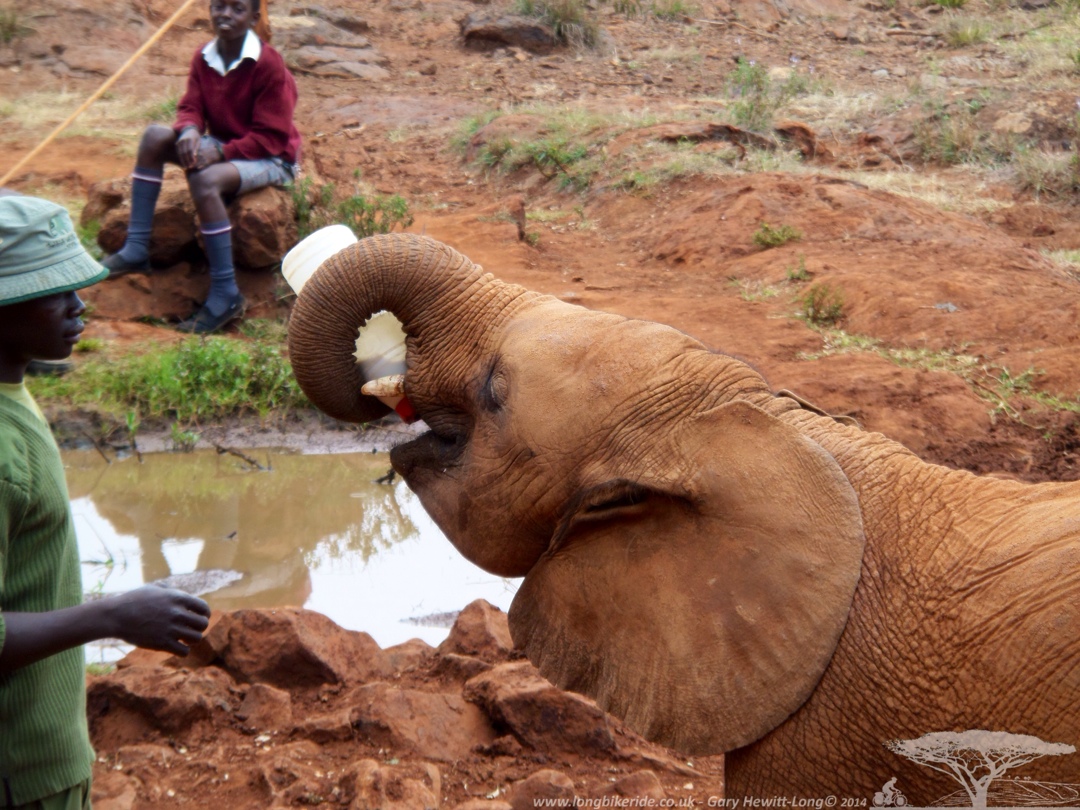 I’m a big girl now, I can hold my own bottle

Each Elephant in care costs on average 900 USD per month to keep so the trust is always looking for more foster parents who can pay towards looking after these orphans who the trust work hard to return to the wild. Unfortunately not all of them make it, some die. 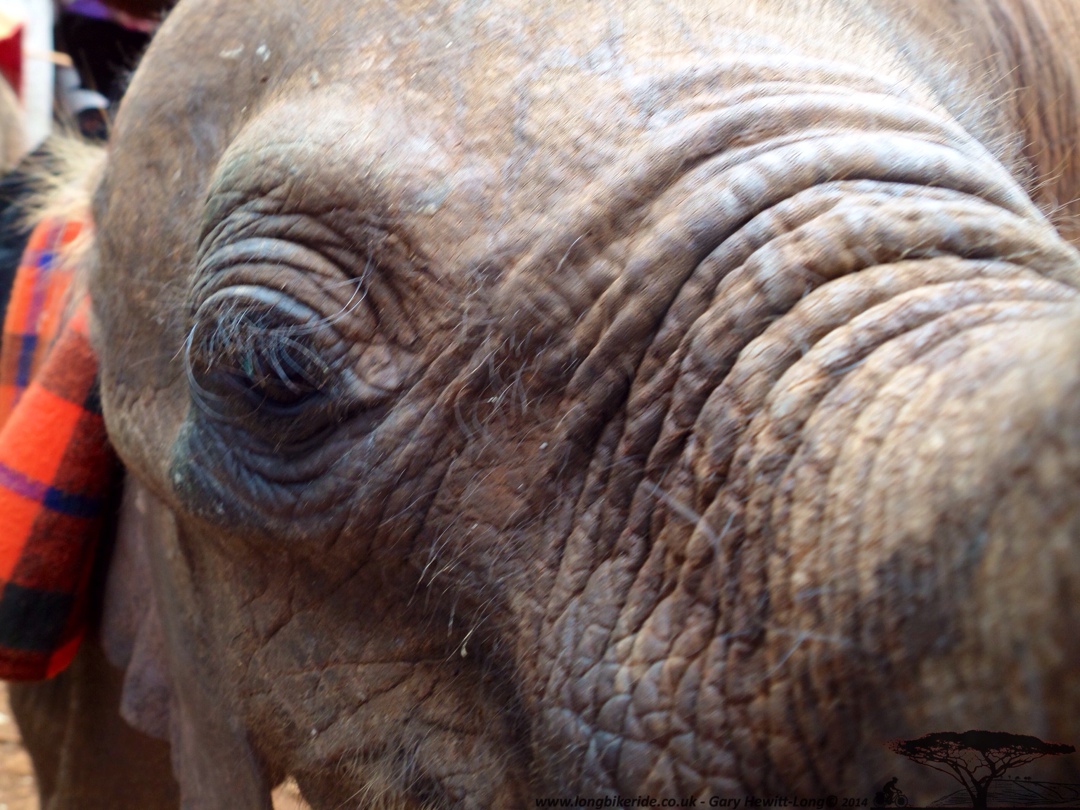 One of the babies comes over to see me

The keepers give a good talk and explanation as to how the elephants are looked after and what the trust does, its definitely worth a visit if you ever go to Kenya. 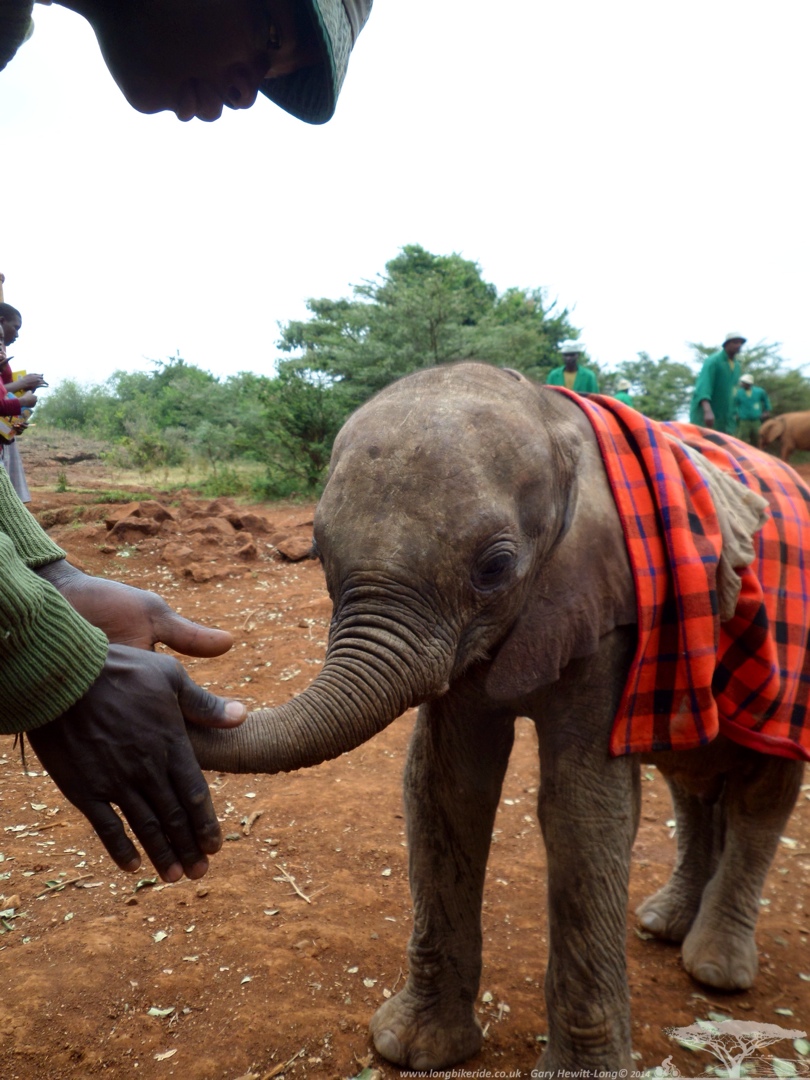 The Trust does more than look after orphaned elephants, although this is what most people associate them with and what captures most peoples hearts when they see them. The Trust also works with Black Rhino and other animals and is heavily involved in conservation, Anti Poaching and has mobile veterinary teams. you can see more about the David Sheldrick Wildlife Trust here: http://www.sheldrickwildlifetrust.org/

Jungle Junction seems to be quite unique, the owner being a biker (motorbike) who travelled for 11 years before settling here. There are lots of motorbikes and landcruisers here and a workshop, which means a full set of tools! Talking to the owner Chris, it was funny to hear him say “you guys on bikes travel as fast as we do on motorbikes, you guys don’t stop”. Saying that I have stopped a lot recently and taken things a lot slower after riding quickly to Senegal. 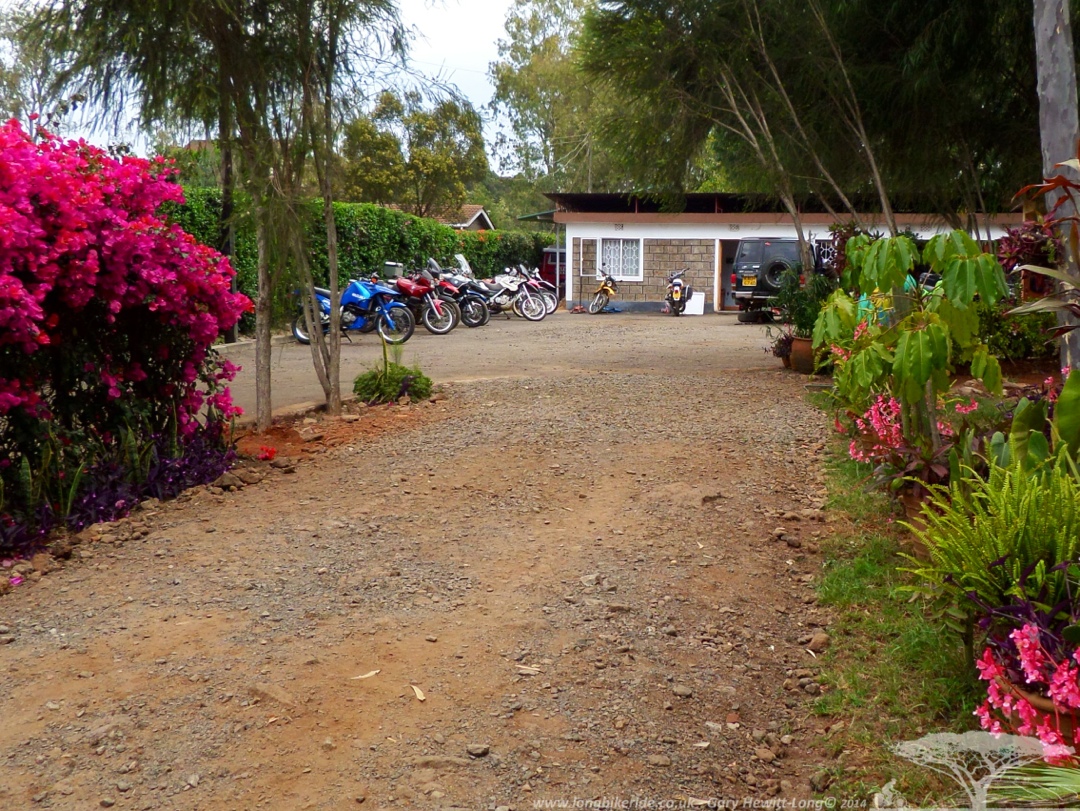 Arriving I only intended to stay 1 night, but as I was unable to go to the elephant sanctuary the day I arrived, I decided to stop a little longer. Feeling a little weary and with several other travellers stopping to talk to about what lays ahead, the best way to get tips on camping places, places to visit. There are also lots of books on African countries and fast internet at JJ’s, 1 day turned into 4, at only about £4 per day to pitch a tent, the place is kept spotlessly clean and with good cooking facilities on site and shops nearby it makes a very good stopping place. Jungle Junction – A nice place to stop for a while