While staying with Cherno and the cycling club, we were able to catch up on some things like washing clothes, bike repairs and taking time to see the beach at Gunjur. 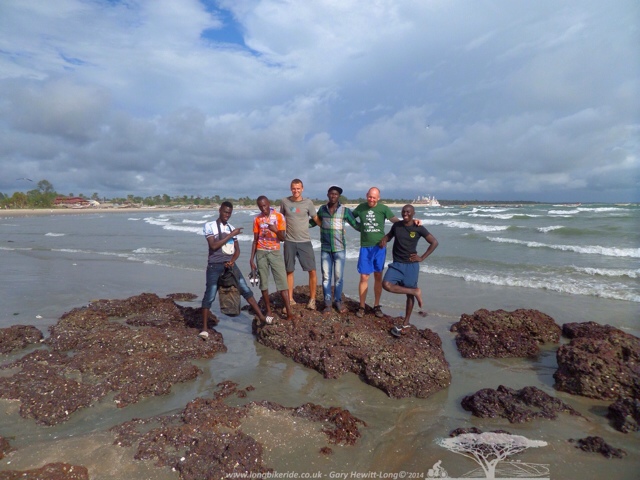 Cherno and his wife fed us well with African food, rice with fish, black porridge (rice with sugar and groundnut) and Cherno’s wife’s famous omelette. 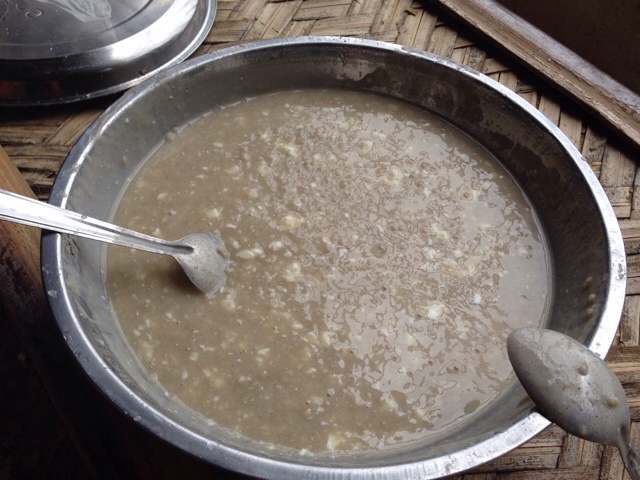 Cherno rode with Wouter and I to Brikama.

Before leaving the UK, I had visited the charity Jole Rider in Tetbury run by David and Helen Swettenham at their UK base in Tetbury. You can read more on the charity page here.

When we’d met we’d discussed the possibility of me cycling to the project in The Gambia. I didn’t wish to commit at that stage to say yes in case I didn’t make it that far or decided to change route.

As I got closer I made contact with David who put me in touch with Saidu Gbla (The G is silent) in the Gambia.

Saidu and his family welcomed both Wouter and I into their home in Brikama where we had a good rest, fantastic food and a good chat on several topics.

We went to visit Saidus football team in the evening, a very energetic and skilled local bunch of lads who train regularly. 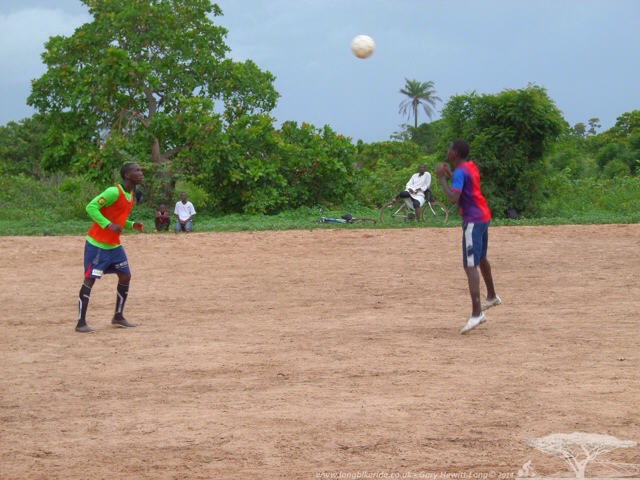 The Football Team that Saidu Manages

Saidus wife prepared a delicious evening meal of chips and omelette which we washed down with Earl Grey Tea.

While we were there rainy season decided to start properly, torrential rain overnight and all night. The power even went out. 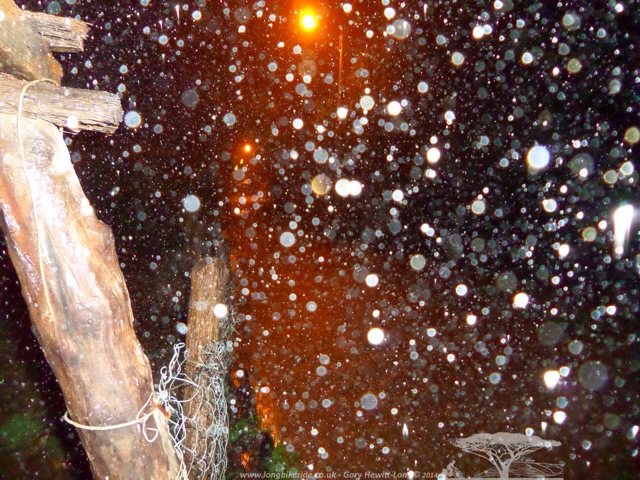 We watched fruit bats flying out at night, another spectacular sight to see hundreds of these large mammals all flying in one direction.

In the early morning they could be seen flying back to roost with the moonlight in the background. Unfortunately my little camera isn’t good enough to photograph them well

The rain eased off eventually in the morning and after breakfast Saidu asked what we’d like to do.
I wanted to see the workshops and things related to the charity. And then maybe any other sights that would be nice to see, like Abuko nature reserve.

We gave Saidu a contribution for fuel and then set off. Firstly going to the nature park. Entry was cheap, 35 Dalasi. But then you HAVE to take a guide. This isn’t made clear when you pay or beforehand and it’s not written anywhere. I explained that I’d rather walk round the signed Trail on my own but this wasn’t allowed. 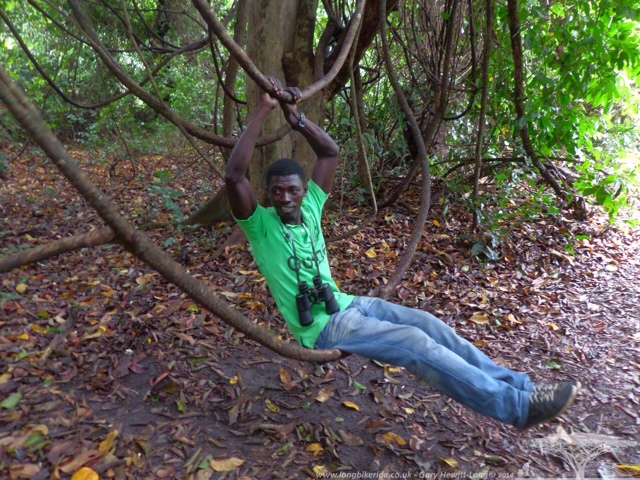 Our guide at the park

The guide wanted 300 Dalasi and then more to rent binoculars. As my priority wasn’t the park and both Wouter and I are on very limited budgets we both decided to scrap the park, but the guide then miraculously dropped the price! 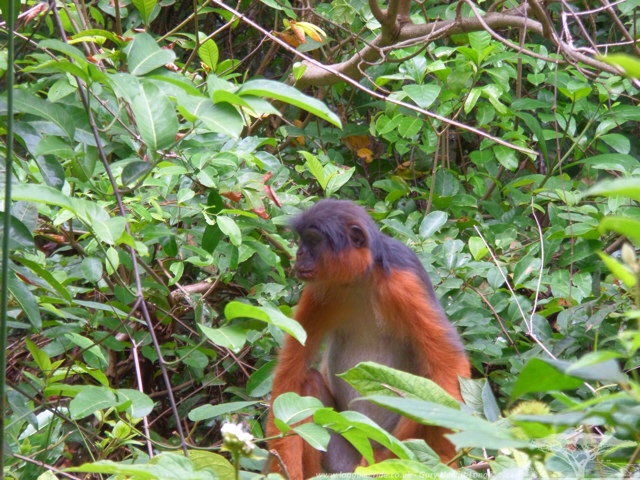 We looked round the park and saw monkeys, crocodiles, hyenas, lizards and deer and then headed back to Brikama for lunch. Hyenas – bigger than I thought!

When I asked Saidu what time the workshop shut so we could see it, he said 4pm so too late to go that day.

Saidu arranged things so we could go first thing in the morning, the African way of doing things is far more relaxed than in Europe, to the point it seems disorganised. This seems to be the way so far in all of Africa that I’ve visited.

Next day we went to the workshop and met Solomon and Barra two of the mechanics at the Jole Rider workshop in Gunjur.
The workshop is impressive with sets of tools, spares and bike stands. In fact I’d say it’s the best bike workshop I’ve seen in Africa so far. The staff are all well trained and they have staff bikes. Each mechanic passes a training course and while we were there they changed a bottom bracket and shortened a chain in a very quick and professional manner. The guys in the workshop explained that they go to schools in the project to repair bikes and to help train those using them in simple repairs. Another container of bikes is on it’s way and Saidu was busy organising the clearance and delivery of the container. He had to go to Banjul after we left. The work being done by Jole Rider is good to see and beforehand I wondered how many bikes they really need. The answer, as many as possible! Saidu with Wouter & I

Gambia has two main roads, north and South of The Gambie river.

Both have recently been repaired and resurfaced. The north first, paid for by Libya and Colonel Gadaffi and the South by Saudi Arabia.

Everywhere you travel in Gambia there are projects by other countries for health, sanitation and schooling amongst other things. We were told by several people the president has lots of business in the country and he’s a very rich man. Without further research as an outsider cycling through the country it’s hard to see what the government are doing to help Gambians. I’d like to research more.

The landscape of Gambia is beautiful. Close to the river it’s fertile and because if rainy season very lush. Farmers are hard at work now because of the rains. I even had a go at ploughing by donkey. Give me a tractor any day, they do what they are told! Kemo ploughing the field with his Donkey

Children still shout and are glad to see us. Some like having their photo taken.

Some run after us as we ride by. There are many ancient monuments in Gambia, they have their own Stone circles like the ones at Wassu. 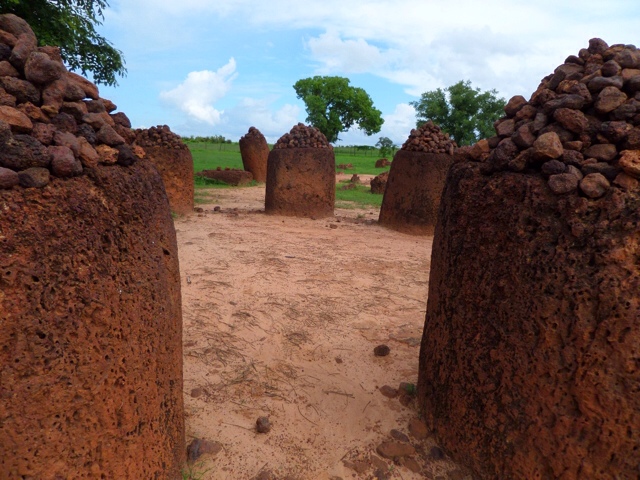 Roadside food is good, omelettes in bread with a coffee from 37 Dalasi. Just over about 55p. Although you need to ask before eating as the price can go up to 75 Dalasi if not confirmed before. 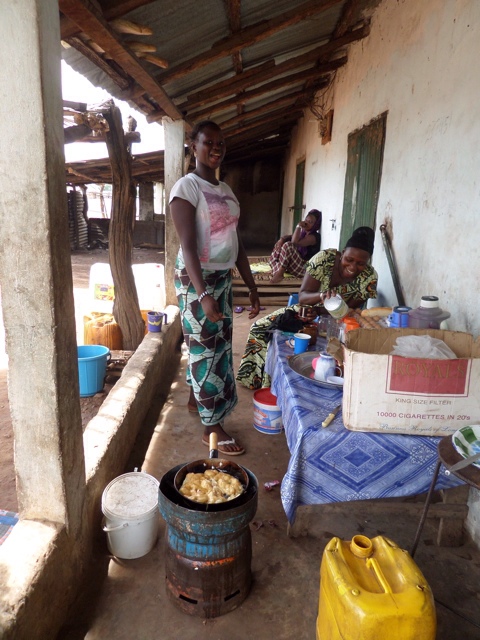 Families are still happy to host us when we ask for a place to put up a tent. Like Mala and her family who let us stay in one of their huts. Na works in the rice fields during the day, then prepares the evening meal and collects water. In the morning she also prepares Cous Cous. 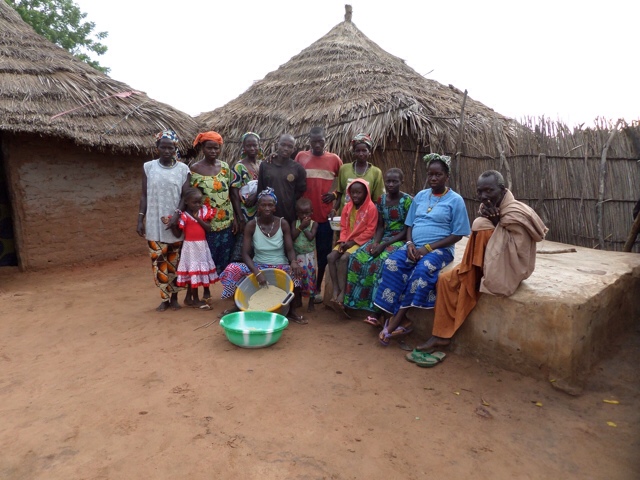 When I reached the malaria zone, I started taking Doxycycline as a preventative. One of the side effects is sensitivity to sunlight. Not ideal when travelling in Africa. My hands seem to have suffered a little with blisters. 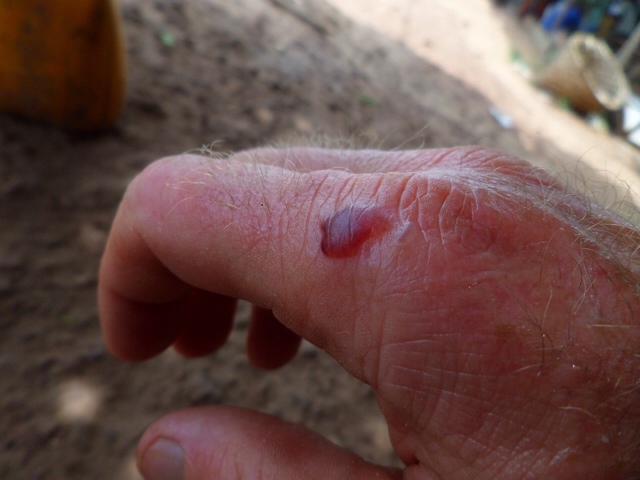 We have been lucky with rain being at places we can shelter, at times it is very hard, turning roads to rivers. The clouds are full of mood and at times dark and ominous. Riding toward the clouds

Doing a trip like this you have to get used to dirt, grime and maybe lower hygiene standards than usual. Bread regularly contains other sources of protein, like ants or beetles baked into the bread. There are flies everywhere. And there is no shower at the end of the day, just a bidon of water to wash with sometimes. Just as we set off one day commenting how we never saw a bakery… We saw a bakery with a very friendly baker who gave us a free loaf. 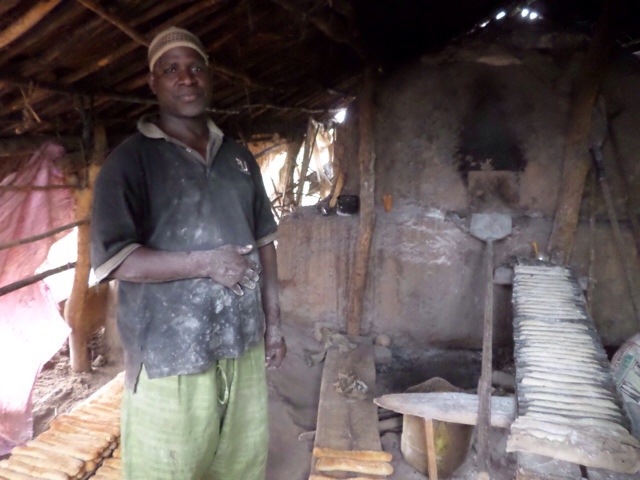 The vultures are still everywhere. A lovely bird flying, ugly when landed waiting by the butchers and for the butcher to turn his back. 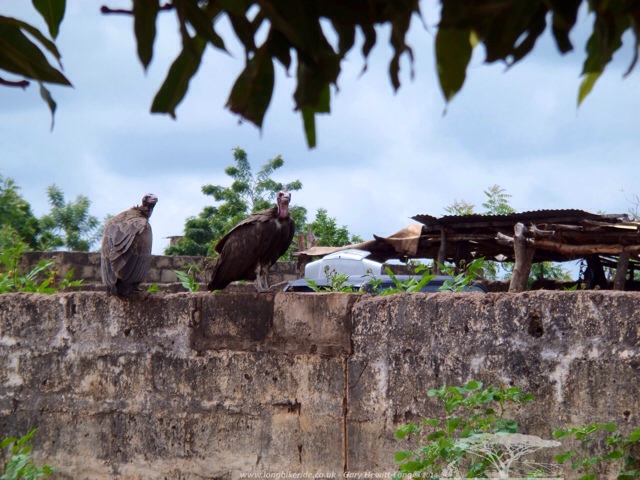 The plan is to continue to Senegal through Basse and then toward Mali.