After a lovely week resting at 7 Palava, it was time to get going again.

Another cyclist from Belgium Wouter arrived a couple of days before and he was planning on heading further into Africa.
Wouter had been in contact for a while after being told by a Moroccan Gendarmerie checkpoint that there were cyclists ahead.
Wouter sent a message and his contact details forward on a piece of paper with a Swiss couple who were driving. Pretty cool that the message arrived. We kept in contact since then.
Setting off after a stop seems difficult. Getting back into a routine of getting up, making breakfast, pack up and cycling. Stops for second breakfast, lunch, afternoon snack and stopping.
Shortly after getting back on the main road to Dakar, there was a customs checkpoint. Although I think cyclists needn’t stop we did and started chatting to a French family who’d flown to Senegal. They were very nice and even gave Wouter and I, a coke with ice. 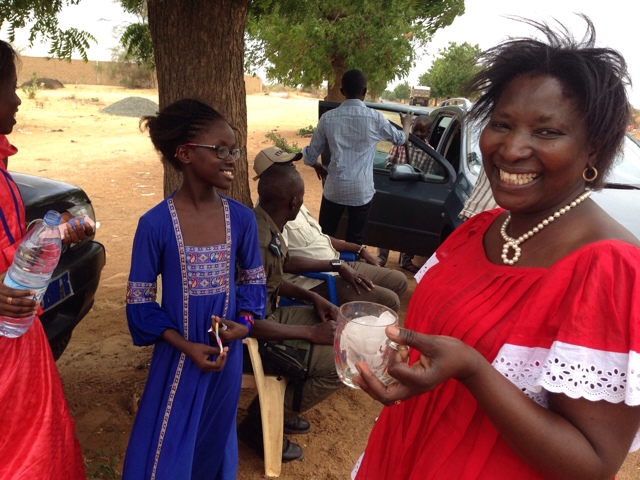 The wildlife soon changed, lots of birds that I’d only seen on TV or in parks. 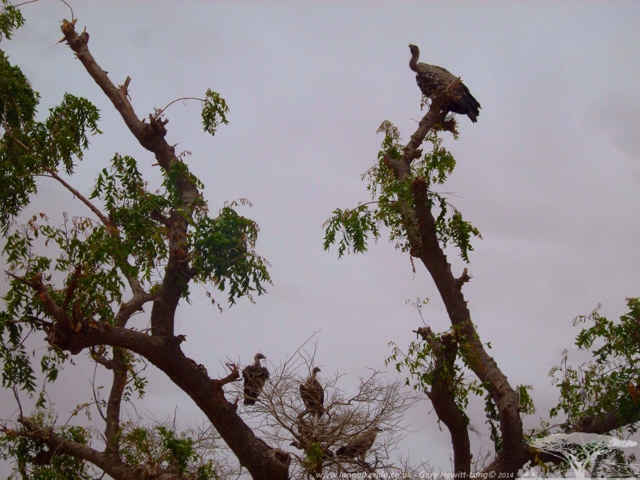 Vultures – I ain’t dead yet! 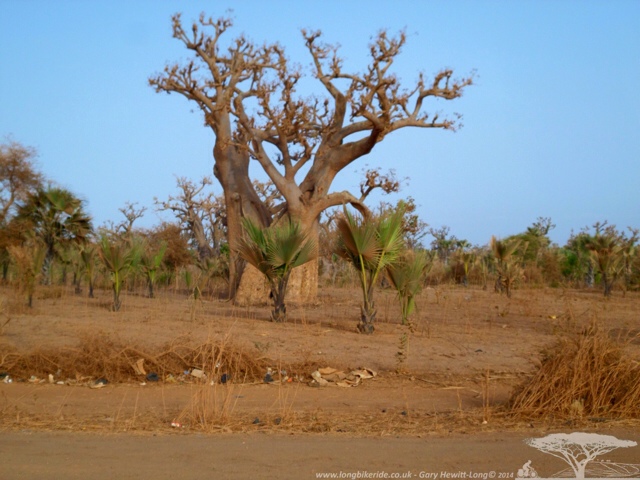 Children shout out “Toubab!” when they see you coming. Toubab meaning white man.
As the first children in the village shout, this alerts the others and they all come out or join in as you ride through. 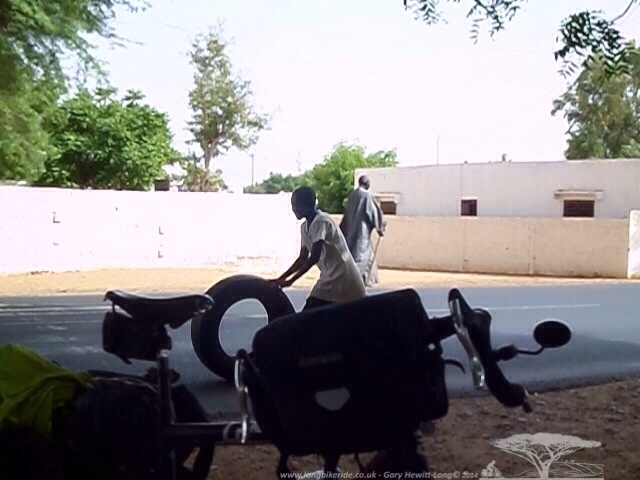 First day cycling after a rest seems hard, getting back into a rhythm and routine. At the end of the day I was glad to be stopping, we had reached a village called Dande Fall. There was a family compound with several huts in and after asking where we could put tents up, we were invited to stay with the family.
There were 30 people living in the compound all related along with their livestock. This is a traditional way of living in Senegal and the family are very close. 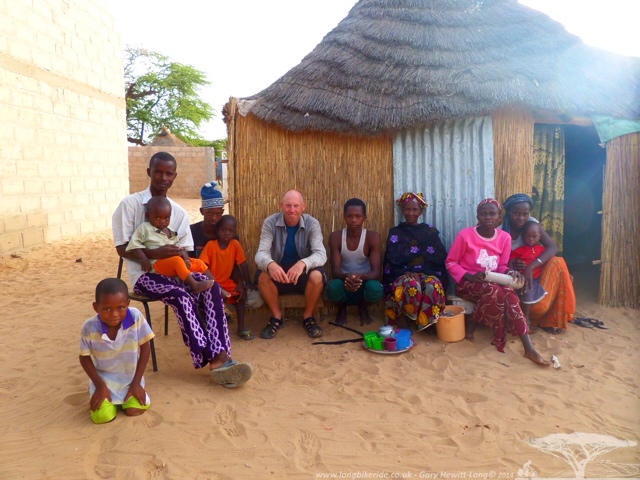 The Family Sow of Dande Fall

Cycling into Thies, a man running along the road shouted “Hello!” Instead of the normal “Bonjour”. It turned out to be an English teacher from Dakar. He lived in Thies and after talking for a while he invited us back to his house for the evening. 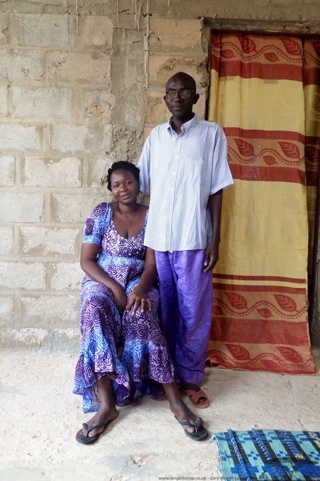 Oumar Guye and his wife (Thies)

We enjoyed a meal of Senegalese Cous Cous, very tasty hand prepared with fish and quite spicy. This is traditionally eaten off of one plate. Normally with the right hand. But we were given spoons. A few problems over the last couple of weeks have meant that continued travel past The Gambia and Senegal may not be easily possible, Ebola!

One Traveller arriving at the campsite I stayed at confirmed the border between Senegal and Guinea was closed. During my rest stay, Liberia and Ivory Coast also closed many borders. After checking the statistics, deaths from Ebola against deaths in those countries through road traffic accidents over the same time period, the rates were about the same. With Ebola having a higher fatality percentage, the risk is still higher that you may be involved in a road traffic accident.

There is another option… Mali and Burkina Faso. Although the FCO advises against all but essential travel in Mali, both countries are landlocked, therefore the route will be a lot hotter… And it’s rainy season so wet and humid as well.

So with that in mind, a visit to Dakar, the capital of Senegal and where the embassies and consulates are for visas was needed.

Dakar was very busy, heavy traffic and with no apparent rules on emissions, very polluted with fumes from the old Diesel engines in cars, community buses and lorries. On the outskirts the main road changed from tarmac to packed dirt. 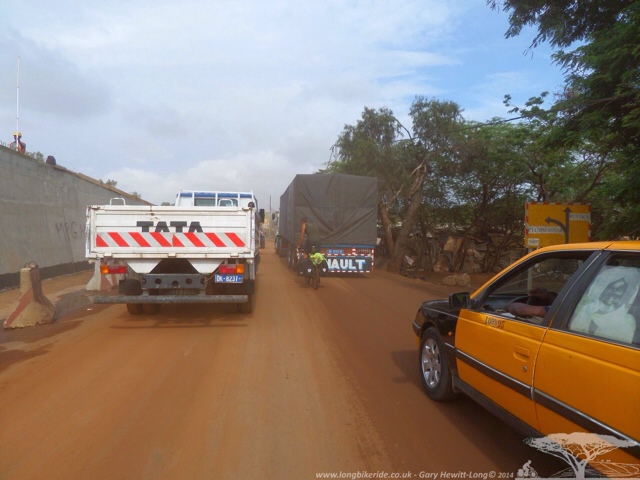 We stayed with a contact Wouter had in Malika Plage. Not far from the beach and we put the tents up on the roof where we could see the sea. Mustafa and his Nephew (Malika Plage)

The following day we rode right into Dakar to try and get Visas. Over the next three days covering almost 90 miles in and around Dakar.

First Mali, arriving, filling out forms and one guy who worked there was ever so helpful. One problem, it was going to take a day to process, meaning it’d be unlikely we could get more visas the same day. We left the passports and 25,000 CFA (£30.50) each at the Mali Embassy and decided to visit the Burkina Faso and Ghana embassies as well in preparation. The visa for Burkina Faso was going to cost 48,000 CFA (£58.50), quite expensive. Most visas look quite nice, yet the most expensive one so far was just a simple stamp.. However while sitting outside the embassy a big black Mercedes arrived. A very important looking woman got out and signalled for us to go over. It was the ambassador for Burkina Faso. She was very interested in what we were doing (thought I was Wouter’s father) and asked several questions. We explained that we were coming back the next day after getting back the passports. 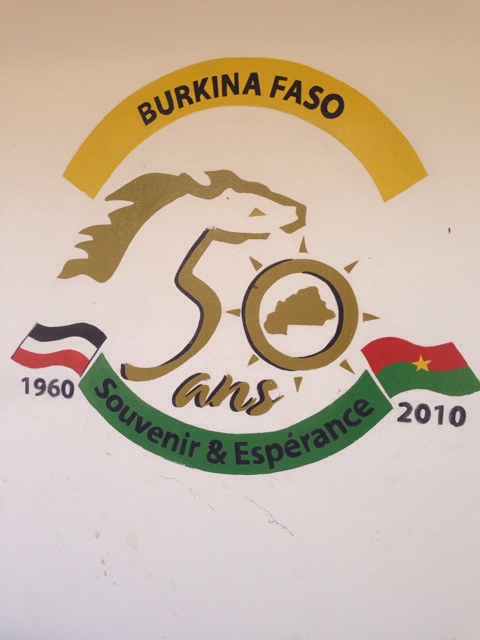 Next day we raced back to the Mali embassy to get the passports back. The route we had taken the day before was blocked by the university as the Gendarmerie appeared to be breaking up a gathering and were fighting students!
Mali visa obtained we headed back to the Burkina Faso embassy…. To find it closed!! It was a public holiday in Burkina Faso, neither the ambassador or the staff had mentioned this the previous day.
After doing some bike maintenance, new chain, reversing chain ring and Sprockets plans changed and after being in contact with Badr who I’d ridden with earlier, he was on Goree island a slave trade point off of Dakar and a tourist hotspot.
We left our host and unfortunately on the way one bus decided to overtake another one while I was going down at 20mph. The only place I could go was into the sand and off the bike. Several locals came over to help me up though. I ended up landing on the ribs I’d broke before and with similar pain I’m very glad I’ve packed lots of paracetamol and ibuprofen!
We eventually got the ferry to Goree and spent a nice afternoon and evening looking around the island and its historical buildings and museum, but Badr was nowhere to be found, he’d left a day earlier!

We found a spot to camp with a local artist on the island. He was living in an old defence bunker.

Goree island had its own atmosphere, relaxed and easy going. 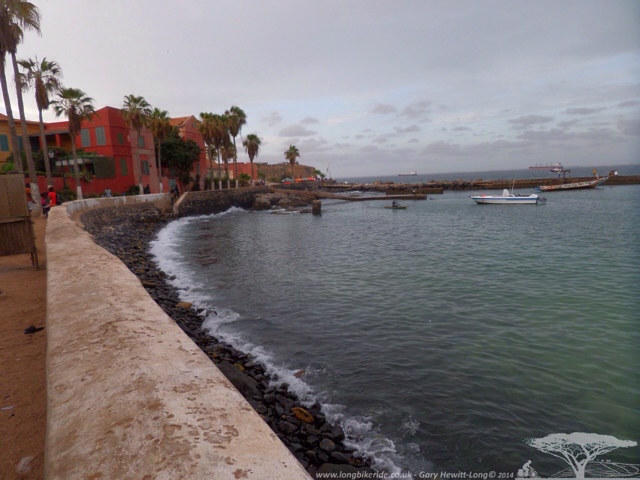 Leaving Goree in the morning and heading back to Dakar, we were able to get the Burkina Faso visa and then head back into town to finally meet Badr. The rainy season decided to show us for the first time how much rain could come down in a short time. I’ve not seen so much rain in such a short time but some quick thinkers were selling umbrellas immediately. Quick off the mark selling umbrellas

The Gambia is a couple of days riding from Dakar heading South. After the rain it was quite humid but did thankfully keep dust levels down. After discussion with Mustafa, we were told the road to Kaolack was not good and that it would be best to turn onto the smaller road at Fatick to Foundiougne where you get a ferry to cross the river.

At Fatick there were some youths playing basketball. Wouter played basketball so we stopped so he could shoot some hoops. While I was sat watching and talking to the children, two other cycle tourists rode by, one being Rustam who I’d ridden with previously now with an American, Andy.
We continued together as a four and stopped 6km short of Foundiougne where the ferry to cross the river is, to camp at a beach by an inland salt water lake. 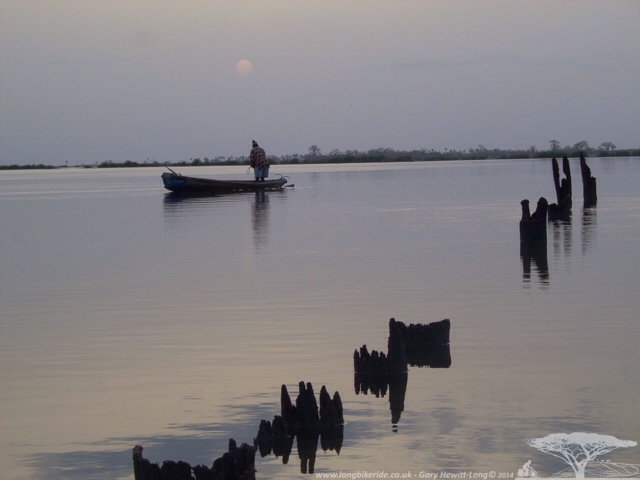 Next day we caught the ferry and continued. No rain this day so very hot. 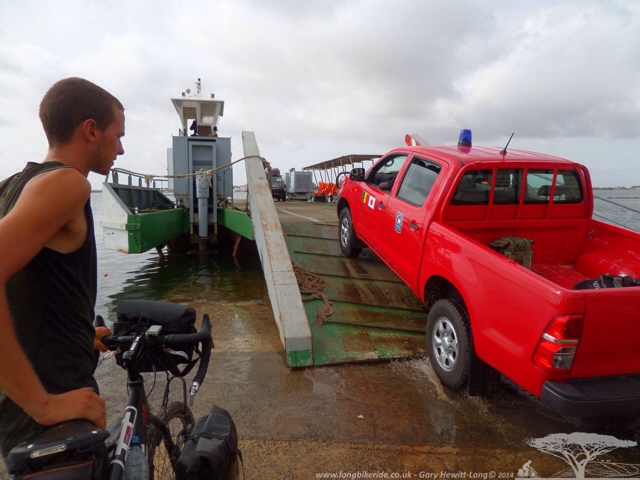 After arriving in Foundiougne we spoke to some other travellers and children before continuing. 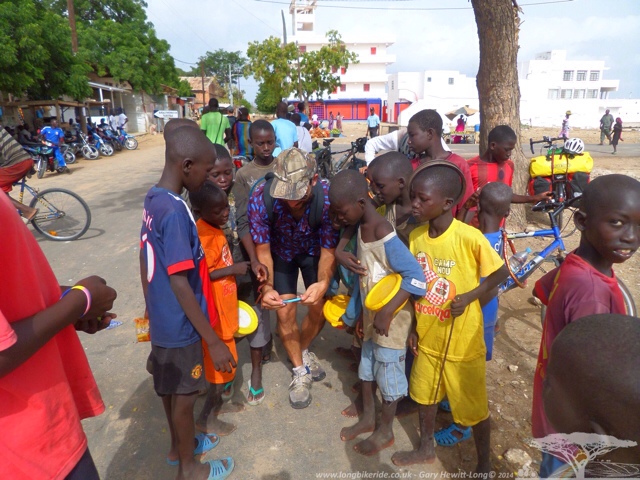 The wildlife was changing with birds, monkeys and insects I’d only seen on TV before. 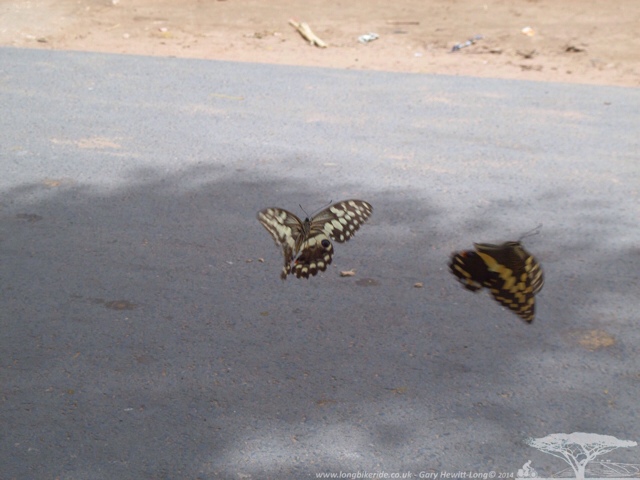 We stopped for a morning break at a French dairy project and bought a litre of yogurt for 500 CFA. About 70p. Adding sugar it was ever so delicious. 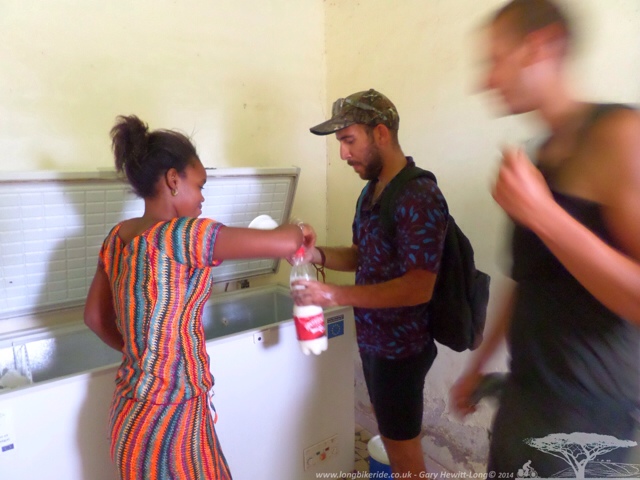 At another village stop children were fascinated to have there photos taken. The further south in Senegal the friendlier the welcome and shouts were from villages, children and adults. It’s really nice to see genuine smiles as you greet people on the way through with Salam Alaykum. 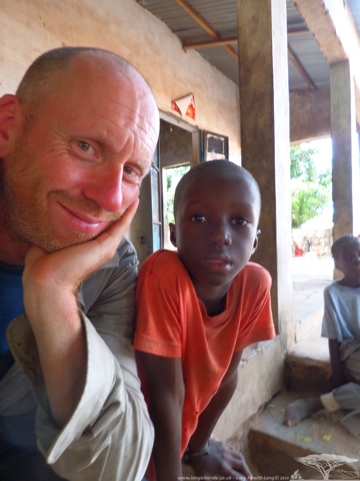 Fascinated by the Camera

Overnight in a village called Medina, Rustam and Andy decided to continue to a campsite further on where they could get a hot shower and Wi-Fi. Whilst Wouter and I chose to find the chief of the village and see if we could put our tents up at his compound. Stopping with locals allows you to get much closer and to get a better understanding of what life is like in each country rather than transiting through like an everyday tourist. The Chief of Medinas Children (some of them)

After giving our thanks in the morning to the chief of the village, we left to ride to Karang, Gambia. After speaking to some back packing tourists I was left with the impression there was a charge to cross into Gambia, or what more likely sounded to me as a bribe. The two Spanish Trekkers I spoke to paid 5,000CFA each to cross. But said as they shared the crossing on a bus with Dentists who left medicines this was reduced from 20,000 CFA. Mmm… A reduction on an ‘official’ fee???

Wouter and I arrived and registered out of Senegal, then entered The Gambia police office. A nice chap took our details and asked about the trip. We were then told to go to another office which looked more like military. They also took details, stamped the passport with a 28 day tourist visa and then we left… No charge.

Later on we met Rustam and Andy again, Andy had paid 25,000 CFA for a 7 day visa and Rustam who entered separately had no charge, but only a 7 day visa!

At the border there were the first signs warning of Ebola Riding into Gambia the clouds gathered behind, followed by a big dust storm which preceded the rain. Everyone appeared to run for cover as we rode by. Dust and rain on the way

The rain eased and people started to say Hello instead of Bonjour. Children still shouted Toubab, but then asked in English for mints or Minties.

The ferry crossing at Banjul was easy, Rustam and Andy arrived to catch the same ferry.

Several weeks before I had contacted Gunjur Paxx global cycling club on Warm Showers, a Gambian Road Cycling club run by Cherno Joof.
Stopping to ask a cyclist the way, the first cyclist I had seen on a good road bike since Rabat, the friendly guy Ibrahim then rode with us almost 20 miles to meet Our contact. Cherno sent an outrider, a guy called Lamin to greet us at the Turntable a point on our route. He then contacted Cherno after meeting us and we were greeted by several members on the road to Gunjur who then rode with is. A fantastic warm welcome.